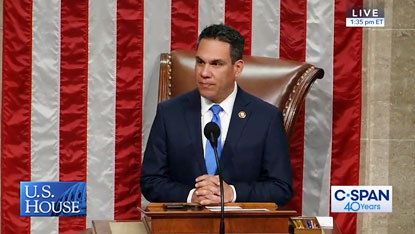 “To step up to the Speaker’s rostrum today was the honor of a lifetime. It was humbling for a kid from San Bernardino to have the opportunity to lead debate in the US House of Representatives, and to preside over the chamber as we discussed such an important priority. I’m proud to have the opportunity to represent the community that raised me in Congress, and I was especially proud today,” said Aguilar.

Aguilar serves as a Chief Deputy Whip in the House Democratic Caucus, Whip of the New Democrat Coalition, and is the Vice Chair of the House Appropriations Committee.