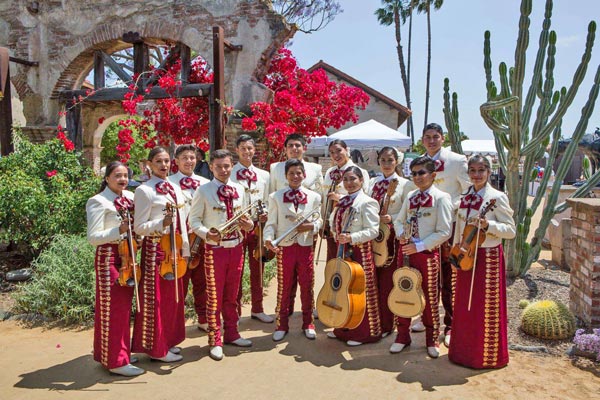 Sinfonia Mexicana Mariachi Youth Academy’s first concert of the season will be presented on Sunday July 8, 2018, at 3 PM. The event will be at the Sturges Center For The Fine Arts, 780 N. “E” Street, San Bernardino, CA 92410.

The event promises to include the best Mariachi music in the world performed by Student musicians.

Stephanie Amaro
Stephanie Amaro was born in Hollywood California and played guitar in punk and alternative rock bands during her teens but fell in love with traditional Mexican music at age 19. She led to the formation of the pioneer Mariachi fushion group Trio Ellas. The group consisted simply of guitar, violin, guitarron and their three harmonized voices. She has accompanied major artists in both Latin and US markets of instruments or as a vocalist or both. Now as a budding solo artist she’s bringing the fire power of her musical experiences in a cohesive aesthetic and unique sound.

Rafael Palomar
Born in the port of Veracruz, México, Rafael Palomar started playing in the Plaza Garibaldi with different groups at the age of 13, while studying at the Escuela Libre de Música in México City.

At age 17, Palomar became a member of Mariachi Latino working in the well-known restaurant “Plaza Santa Cecilia” in México City, accompanying many famous singers of the day. Later, Rafael Palomar had the tremendous opportunity to become a member of Mariachi Vargas de Tecalitlán, with whom he traveled to many countries including the USA, Japan, Holland, Canada, China, Venezuela, Colombia, Ecuador, Chile, Peru and others. They accompanied many singers, including Lucha Villa, Lucero, Beatriz Adriana, Estela Nuñez, Aída Cuevas, Guadalupe Pineda, and more. Rafael Palomar currently resides in the Sylmar, CA and is the lead instructor for music and performances for the Sinfonia Mexicana Mariachi Youth Academy.

Mariachi Youth Academy
The Sinfonia Mexicana of San Bernardino established the Mariachi Youth Academy in February 2009 at the Sturges Center for the Fine Arts for area youth to learn and perform mariachi music as well as understand its origins and cultural significance. The Academy’s mission – is to establish a continuing and comprehensive course of study that will challenge and enhance the student’s ability to read music, master their instruments and enhance stage presence through the art of performing mariachi music.

The goal is to prepare and encourage Academy students to further their musical education. The program instills responsibility, discipline and emphasizing the advantages of higher education. Classes are currently being taught for intermediate and advanced students and 25 beginner students started in August.

With world-class musicians/instructors guiding the program, the Mariachi Youth Academy is poised to be a nationally recognized learning institution for the advancement and promotion of the art of mariachi music and performance.

The Academy has performed at the House of Blues in Anaheim and the California Theatre of the Performing Arts in San Bernardino. They have performed with some of the best Mariachis in the world, including Mariachi Vargas De Tecalitlan, Mariachi Sol de Mexico de Jose Hernandez Grammy award winning Mariachi Divas de Cindy Shea, Symphonic Mariachi Champaña de Jeff Nevin and the San Bernardino Symphony Orchestra.

In 2016 the Sinfonia Mexicana Mariachi Youth Academy competed against 15 Mariachi student groups at the annual “Battle of the Mariachi” at Mission San Juan Capistrano. The San Bernardino group placed second to the Tucson, AZ youth group, which made them the highest rated group from California in their age bracket.