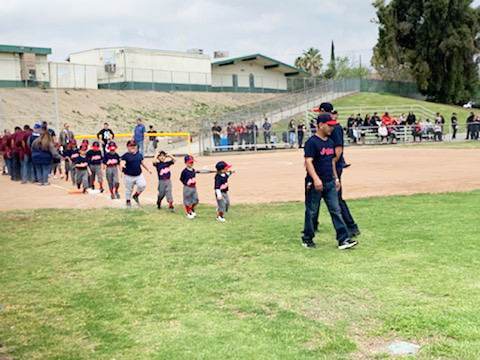 On Saturday April 6th at McKinley Park the annual T-Ball Ceremonies kicked off to bring forth the new season in Colton. The children along with their families and loved ones were in attendance to share the excitement for the upcoming year. With 14 teams and about 150-plus players signed on to participate, Colton T-Ball expects a very competitve and fun-packed year for the kids.

When speaking to current board member Fred Vinegas on his thoughts and what he’s taken most from his 36 seasons of coaching he said, “For the kids you just need to take them at face value and treat the situation as is. This program is to teach discipline and also create a fun environment for the kids while learning multitude of skills that carry on past this division.”

It was evident with the parents that they share this same vision for their very own. I had the chance to speak with Mariono Gonzales and Angelica Alvarado, parents of Mariono Armando Gonzales who plays for the Indians in the T-Ball league.

They went on to say how important it was for their child to be a part of this culture in Colton. Mariono, a former player for the Colton League, saw it fitting that his son be involved in the same sport that he grew up in as well. The success that this league brings is evidence that many parents themselves were former players growing up and now bringing their children to the sport.

It’s important for many of these figures to give back to their community as it is for manager Oshay Jelks. He, too, coaches his son on the team and makes an effort for not only his kid but every other on the team that he passes his values onto them. “Discipline, trust and respect” are the words Oshay preaches to his players, and most importantly to each other. He wants his team to not only love the sport but know that there are more important lessons that can be learned to be taken with them for the future. It’s also important for him to teach the game to the kids so the integrity of the sport stays true.

Colton T-Ball carries a strong image and is respected by many as its foundation is the concept of family. There is a reason this league has lasted as long as it has – it’s been and continues to be managed by people who care about what’s most important, and that’s the kids.