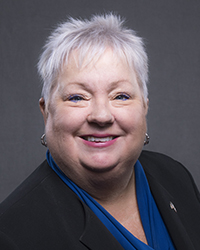 The San Bernardino County Board of Education elected Laura Mancha as president of the five-member governing body during its monthly meeting on Dec. 2.

Mancha acknowledged and thanked Brown for his service and leadership during the past year as board president. “It has been my honor to serve as president and represent the County Board of Education,” Brown said.

Mancha has served on the County Board since 2010 and was previously president of the group during the 2013-14 term.

In addition to the presidency, Alen Ritchie was elected as vice president of the Board.

Ritchie represents Trustee Area E, which includes the school districts of Bear Valley, Colton, Morongo, Redlands, Rim of the World (east of Highway 138) and Yucaipa-Calimesa. Board members are elected to four-year terms.

The Board establishes policy, adopts an annual budget, approves building plans and hears student expulsion, inter-district transfer and charter school appeals. The Board meets monthly, regularly the first Monday of the month. The next scheduled meeting for the Board is scheduled for Jan. 6, 2020.

The Afro exhibit opens at the County Museum