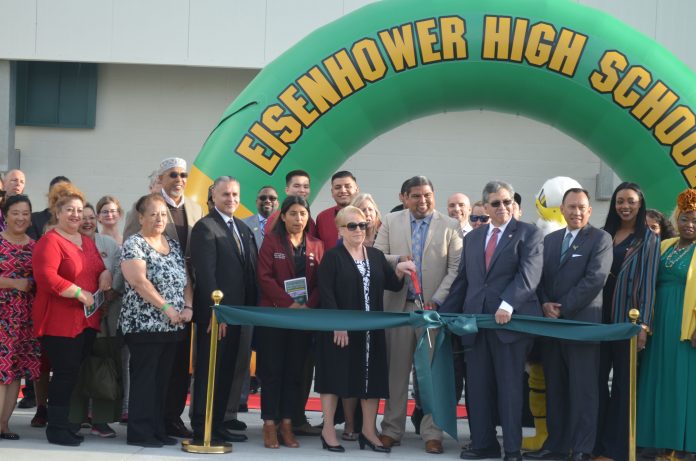 On Thursday, April 4 Rialto Unified School District and Eisenhower High School held a ribbon cutting celebration for the newest upgrade to the school and addition to the district. Not only was the event a whose-who of influential people in the area but the community came out in a big way to celebrate this monumental achievement for the Rialto area.

The money that made this Preforming Arts Center possible was a bond measure that Rialto voters approved in November of 2010 called Measure Y. The bond passed with over 69 percent of residents voting to approve the bond according to San Bernardino County elections division.

“Eisenhower is truly the flagship school of the city of Rialto,” said former Eisenhower Principal and Board of Education Vice President Nancy G. O’Kelley who sat on the Measure Y steering committee. “There was a time when there were talks over pushing all the money into the new stadium and none to build the Performing Arts Center, but oh no, one way or another that Performing Arts Center is getting built.”

The event started with speeches and a ribbon cutting on the north side of the building. Rialto Unified School Board of Education President Edgar Montes said, “that this is a long time in the making.” He also thanked voters for allowing them access to the funds to make this dream possible.

Following the ribbon cutting the event moved inside the new Performing Arts Center where there was standing room only to watch Eisenhower High School students perform. The extremely talented students showed everyone what Rialto is made of, and why we are so proud to call this city home. After the performances there was an intimate reception of food, drink and beautifully decorated cakes to cap off an amazing night. The food was once again prepared and served by Rialto’s award-winning Nutrition Services Program.