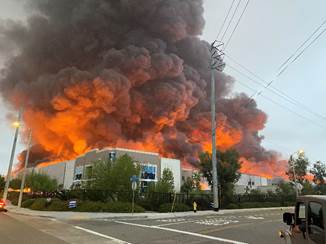 Firefighters received the call of a commercial structure fire at the building at 2255 W. Lugonia Ave. at about 5:30 a.m. Friday, June 5.

Arriving crews found heavy flames and plumes of thick black smoke that, at one point, could be seen from nearby mountain communities rising above the cloud layer.

About 100 employees of the distribution center were able to evacuate prior to the Fire Department’s arrival. No injuries were reported.

Fire agencies from throughout San Bernardino County and other surrounding communities responded to fight the fire. Ladder trucks surrounded the massive structure pouring water on the flames for several hours. No other structures were damaged. Redlands Police responded to control traffic. Utility crews and ambulance units were also on hand.

“We are extremely grateful to our allied agencies for their support,” said Redlands Fire Chief Jim Topoleski.

The massive flames were clearly visible from the nearby Interstate 10. At one point, California Highway Patrol closed the westbound freeway to early morning traffic.

By late afternoon, the fire had been brought under control but several hot spots remained burning inside the remaining walls of the structure. With the structural integrity of the building a major concern, the building’s owners began plans to stabilize the structure and prepare to dismantle it, while firefighters planned to enter with them over the coming days to fully extinguish the fire and continue the investigation into the cause.

The cause of the fire and the point of origin are unknown and still under investigation.

Damage is estimated in the hundreds of millions of dollars. The building was home to Kuehne and Nagel, a third-party operator that helps Amazon ship extra-large items to customers.