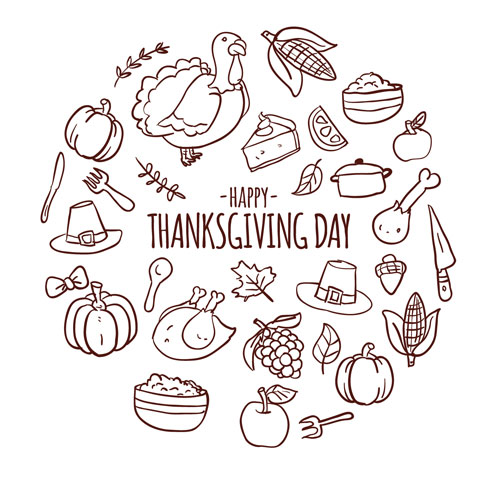 Thanksgiving Day is a national holiday. In 1789 George Washington proclaimed it as such on November 26. Abraham Lincoln did the same in November, 1863. In 1939 President F.D. Roosevelt proclaimed the fourth Thursday of November as the holiday, and every President since then has followed this tradition.

How did it all begin? Bradford’s history states that 102 voyagers set sail on September 6th, 1620 from Plymouth, England; they landed in America on November 11, 1620.

It was scheduled for May and the ship was named for the month and the word flower was added as a symbol of hope. But, was November of 1621 the date for the first Thanksgiving? Probably not. San Elizario, Texas says that in 1598, 23 years before the Pilgrims, they celebrated thanksgiving with the Spanish explorer Joan de Onate, on the banks of the Rio Grande River.

Then there is Virginia. The citizens of the Berkeley Plantation on the James River claim Thanksgiving Day started with their ancestors on December 4, 1619. On 1963 President John Kennedy officially recognized the plantation’s claim.

Provincetown’s Thanksgiving was not family oriented. It was a multinational community event. It included Native Americans. Neither was it a religious event. It was really a “harvest festival.”

THE CHAMBER OF COMMERCE AND CITIZENRY OF ST. AUGUSTINE, FLORIDA DECLARE THAT THANKSGIVING DAY WAS FIRST CELEBRATED IN THEIR CITY ON SEPTEMBER 8, 1565.

It is safe to say that our modern celebrations are primarily for food and football. Throw in a parade or two. Family is just the beginning that usually includes friends and neighbors. Football is essential along with booze and snoozing.

Turkey Day is another myth. None of the afore mentioned celebrations had turkeys, corn on the cob, potatoes, apple or pumpkin pies and even cranberries. The only meat they ate was deer. Of course, ice cream was a much later addition.

By the way, I’ve seen the replica of Plymouth and the rock. Citizens dress up in Pilgrim garb and carry muskets. First, they landed at Provincetown and the rock is fictitious. There is a rock but it has been split and splintered. So many tourists wanted a piece of it.

No Pilgrim ever lived in a log cabin. They first appeared a hundred years later, brought to America by the Germans and Swedish. It is believed by historians that the Pilgrims lived in wood clapboard houses made from sawed lumber. The word “log cabin” cannot be found in print until the 1800’s.

Almost all depictions of the early Pilgrims showed them dressed in black. They did not dress in black and never did they wear those funny buckles, weird shoes or black steeple hats. The reason for misleading such wear was quaint and the reputation was for quaintness. It was reputation only.

The Pilgrims were high on tolerance and education. By 1630, the Pilgrims had settled Boston; by 1635 they had started the famous Boston Public Latin Schools; in 1640 the first American book was published; by 1641 there was a law passed requiring an elementary school in every town with at least fifty families. Did I mention that Harvard College was started in 1641?

A great misinterpretation of both the Pilgrims and Puritans is about sex. Tradition says that both abhorred it. Not true. In fact, when one member of the First Church of Boston refused to have conjugal relations with his wife two years in a row, he was expelled.

Rev. Cotton Mathers, the well-known Puritan minister, “condemned a married couple who had abstained from sex in order to achieve a higher spirituality.” He later wrote, that the victims were, “victims of a blind zeal.”

Perhaps the most insidious view of these early settlers had to do with the claim they were morbid. H. L. Mencken and Mark Twain, both write that they had, “a haunting fear that someone, somewhere might be happy.” That was not true. The Puritans welcomed laughter and dressed in bright colors.

The historian, Carl Degler observed and wrote, “The Sabbarians, antiliquor, and antisex attributed to the Puritans and Pilgrims are a nineteenth century addition to the much more modest and wholesome view of life’s evils held by the early settlers of New England.

Without a doubt, Thanksgiving Day, November 24, 2016 is a National Holiday. We worship it with adoration and reverence. It is the essence of our religion. Our icons are the turkey and football, both college and the NFL. We eat the turkey and all of its trimmings.

Then we collapse in our pews (the couch or easy chair) and argue the subtle points of football. It’s certainly a paganistic religion.

However you spend Thanksgiving Day this year, I urge you to include a time to express gratitude to God for His providence to our nation.

Amen Selah. So be it.