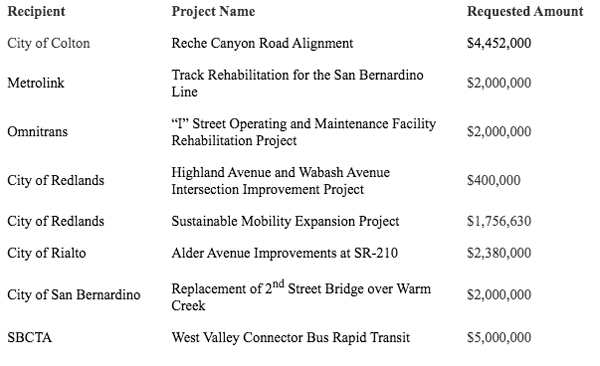 “I’m proud to have supported these surface transportation and water infrastructure programs in the INVEST in America Act, and grateful my colleagues and I were able to pass this bill to rebuild America. This is a great first step toward a transformational investment in our infrastructure that will lead to good-paying jobs, cleaner air, less traffic, and a stronger economy in the Inland Empire,” said Aguilar.

“Reche Canyon Road Extension to Hunts Lane Project is a critical project for the City of Colton. It is expected to relieve excessive congestion to one of the most impacted intersections in the city during morning and afternoon peak rush hour traffic. Approval of the much-needed funding and completion of this project will not only benefit City of Colton residents, but will also benefit 20,000 daily commuters from surrounding cities. Reche Canyon Road is a multi-jurisdictional connector road that traverses the Cities of Colton, Loma Linda, and Moreno Valley within the Counties of San Bernardino and Riverside,” said Colton Mayor Frank Navarro.

“We thank Representative Aguilar for his continued focus on safety and commitment to infrastructure improvements along Metrolink’s San Bernardino Line, one of our busiest corridors,” said Metrolink Interim CEO Arnold Hackett. “This investment will enhance safety at crossings shared by vehicles and trains and help us maintain on-time performance of 95 percent.”

“Omnitrans is gratified to have been selected by Congressman Aguilar as a potential recipient of INVEST in America Act funds for its ‘I’ Street Rehabilitation project and congratulates the House on its milestone passage of the Act,” said Omnitrans public transit agency CEO/General Manager Erin Rogers. “Upgrading the ‘I’ Street facility, which houses paratransit operations for seniors and people with disabilities, will allow eligibility screening and increased vehicle capacity for community members in Omnitrans’ service area, a majority of whom are people of color or economically disadvantaged.”

“The City of Redlands is grateful for the Invest In America Act funding of nearly $2.2M, and we appreciate Representative Aguilar’s commitment to public safety and infrastructure investment. A portion of the funding will construct a roundabout at a heavily congested intersection used daily by local children accessing three (3) nearby schools. The remaining funding will improve safety and reduce greenhouse gas emissions by constructing three (3) bicycle/pedestrian trails to connect residential neighborhoods with several community destinations. These projects would not be constructed for many years without this infrastructure funding,” said Charles Duggan, Redlands City Manager.

“We’re extremely grateful to Congressman Aguilar for his work in securing this critical funding for the Alder Avenue interchange improvement,” said Rialto City Manager Marcus Fuller. “With its proximity to major distribution centers, this highly anticipated construction project will fortify Rialto’s role as a regional supply chain hub, while improving overall traffic flow along the 210 Freeway. This will create new economic and employment opportunities, reduce congestion and improve air quality along one of the most robust transportation corridors in Southern California.”

“The City of San Bernardino has some unique challenges when it comes to rectifying several of our infrastructure challenges, and we are grateful that Representative Aguilar has stepped up to champion funding for one of our highest priority projects: the replacement of the 2nd Street Bridge in downtown.  The bridge, which has been closed for quite some time, is a vital part of the City’s street network, but the City lacked the resources to fully fund its replacement, until now,” said Robert Field, San Bernardino City Manager.

“We would like to thank the House of Representatives for taking input from jurisdictions on local transportation priorities and including them in the INVEST in America Act.  We are grateful to Congressman Pete Aguilar who has consistently championed projects important to San Bernardino County residents,” said SBCTA Board President, San Bernardino County Supervisor Curt Hagman.

The INVEST in America Act is now pending before the Senate.