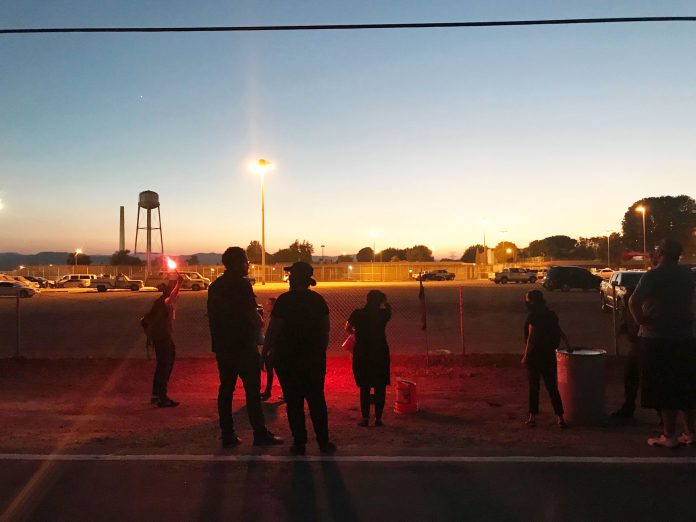 A noise demonstration outside of the California Institution for Women in Corona the night of August 21 reminded prisoners that they are supported while making it clear to prison officials that a nationwide action is underway.

Demonstrators banged pots and pans and beat a big metal drum outside the facility as part of a solidarity action with the national prison strike, which prisoners in some 17 states across the country are conducting from August 21 through September 9. In Southern California, a similar demonstration is planned for the final day of the strike.

The nationwide strike was called by Jailhouse Lawyers Speak, a largely anonymous group of incarcerated prison activists with legal expertise, after a riot at Lee Correctional Institution in South Carolina left several prisoners dead. Those on the inside say prison officials created the conditions for increased tensions and violence among prisoners and that guards let prisoners who were injured “bleed out” instead of allowing them to receive proper medical care.

After the riot, Jailhouse Lawyers Speak released a list of 10 demands. They include immediate improvement in conditions of prisons, the prevailing wage in the state or territory paid to all working prisoners, the rescinding of legislation permitting life without parole, and increases in rehabilitative services offered.

This nationwide strike builds on the prisoner strike that started on Sept. 9, 2016. Whereas the 2016 strike focused on workers within prisons withholding their labor, the current action embraces a diversity of tactics, including work stoppage, but also hunger strikes, sit-ins, collective refusals to carry out orders from officials, boycotting commissary and the boycotting of other for-profit operations inside.

Several other organizations have actively supported this strike, including the Incarcerated Workers Organizing Committee, an organization within the Industrial Workers of the World, a militant labor union that has been at the forefront of direct action struggles for more than 100 years. A number of others have endorsed the strike, like the San Francisco Bay View Newspaper and the Anarchist Black Cross Federation, a non-hierarchical organization committed to supporting political prisoners.

Local Anarchist Black Cross organizers – along with members of the Revolutionary Abolitionist Movement and some IWW members – made noise outside of the women’s prison east of Los Angeles on August 21.

We encourage those who are concerned about the human beings criminalized and locked in cages in the United States to support the prison strike. Visit prisonstrike.com or https://incarceratedworkers.org/campaigns/prison-strike-2018 for more information on how to get involved. You can provide monetary support at https://fundly.com/2018-prisoner-strike. If you are on twitter, you can follow @JailLawSpeak and @IWW_IWOC.

This Letter to the Editor submitted by James Anderson of Riverside.

What can the census do for my community?

Now more than ever, an accurate Census count is needed to uplift working families