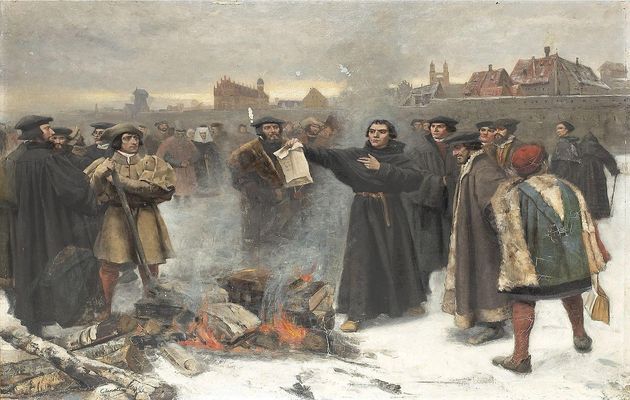 October 31 is an important date, but it is especially important because of what happened in 1517.

Martin Luther, who became the father of the Protestant Reformation, nailed his famous 95 Theses to the Castle Church door in Wittenberg, Germany on October 31, 1517. They formally charged the Pope and Catholic Church leaders’ with the unbiblical practice of selling indulgences.

Basically this meant that for money, parishioners would be granted forgiveness for sins along with assurance of a place in heaven.

Luther was born on November 10th in 1483 in Eisleben near present day Berlin, Germany. His parents were Hans and Margarthe Luther, middle class peasant laborers. A miner, he worked hard to give Martin a good education. By the age of 21, Martin held a Master of Arts degree from the University of Erfurt. His father wanted him to be a lawyer, but he experienced a life changing event.

On July 2, 1505 when Luther was 22 years old, he was visiting his family in Erfurt when a thunderstorm hit with a flash of lightning that struck the ground near him. Thunder exploded in his eardrums and knocked him flat on the ground. In fear for his life, he cried out, “Help me, St. Ann. I will become a monk.” So he did.

Two weeks later he walked into an Augustine monastery to fulfill his promise. Following his schooling he became a theology professor in Wittenberg. This was followed by a couple of years of study in the Vatican at Rome.

Then came October 31, 1517. All-Saints Day. Frustrated, unhappy and angry with what he saw, he decided to act. His action started one of the greatest events in the history of the world. Known as the Protestant Reformation.

He was sickened by the corruption in the Church, primarily the selling of indulgences for passes into heaven. Money was the barter for salvation rather than penance.

Television, newspapers and other means of communication of news were unheard of. The church doors of churches served as the bulletin boards for announcements in the Middle Ages. So, Martin Luther nailed 95 Theses to the doors of the Castle church in Wittenberg. They consisted of “a compendium of criticism and changes he wanted to see within the Church.

The present curator of the St. Monastery of Augustine is Carsten Fromm. In a recent article he says, “The Protestant Reformation was the origin of freedom, freedom of speech and freedom of thought.”

It is important for all of us to recognize that Luther did not want to split the Catholic Church. He only wanted to weed out its corruption. The desire for change and rebellion had been simmering for centuries throughout much of Europe. Fear dominated the people. Luther traveled where others were afraid.

The church could not tolerate such a rebellion. So, in 1521, Pope Leo X excommunicated him. For Luther’s safety, Frederic III took him to Wartburg Castle for his safety. He was there for 10 months and during that time he translated the New Testament from Greek into German. Later on he also translated the Old Testament into German.

In 1525, he married Katharina von Bora, a former Nun, and they had five children. It is common knowledge that Luther loved God first, his wife and family second and eating German sausage and drinking beer third.

From 1533 until his death in 1546 Luther served as the Dean of the theology facility at Wittenberg University.

The place that Martin Luther has in the pages of recorded history is unquestioned. His statute in front of the doors where he nailed the 95 Theses is merely a weak representation.

It was the rippling affect that changed the world. His use of the Guttenberg Press in less than 100 years did that. The era of Martin Luther was relatively uneducated with very few people being able to read or write. But Luther took advantage of printing to expose the average person of his views.

He was the catalyst for making Protestantism a viable option for Christians.

Consider John Calvin, the father of Conservative Evangelism. He fathered the Baptists and Reformed traditions. Baptists are the largest Protestant churches in America. John Knox and the Presbyterians were off-shoots from Calvinism.

The Pilgrims and Puritans were part of his theological concepts. The strangest challenges to Calvinism were the Arminians, expressed primarily by John Wesley and the Methodists.

Consider the fact that the largest Protestant churches in America have their theological roots in the beliefs of either John Calvin or John Wesley.

History has declared the Dark Ages ended with the advent of the Protestant Reformation (Martin Luther) and the Gutenberg printing press. It opened doors of education, exploration, freedom of thought and ultimately the United States.

Next year on October 31, 2017 will mark the 500 anniversary of Martin Luther’s historic nailing of the 95 Theses to the door. The celebration for it can begin now.