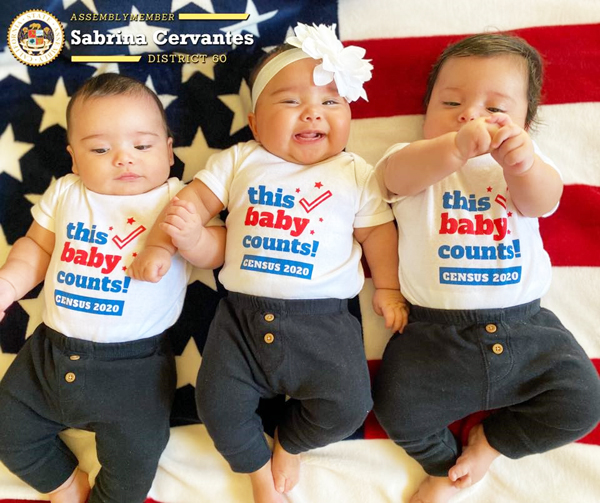 By Sabrina Cervantes, a mother who proudly represents the 60th District of the California State Assembly, which encompasses the cities of Corona, Eastvale, Jurupa Valley, Norco, a portion of Riverside, and the unincorporated communities of Coronita, El Cerrito, and Home Gardens. Cervantes serves as Chair of the Assembly Committee on Jobs, Economic Development, and the Economy.

As a new mother to three infants, I immediately hoped for what every parent in our community wants for their children: the best and brightest future for our children.

That is why, when our family’s Census form arrived in the mail, we made sure to count every person in our home, especially our infant triplets.

The Census is not simply an academic tally of how many people there are. It is an opportunity to build a brighter future for our community, our state, and our nation. A complete Census count will help ensure that your federal tax dollars go towards funding programs in our local community—from child nutrition, to Head Start, special education, and foster care.

Census dollars supply funding towards school lunch programs, so that no child has to learn on an empty stomach. The sidewalks and parks that all of our families use to stay active and healthy, roads and bridges, access to health care—the Census impacts funding for all of these. Historically, California has been a donor state to the Federal Government. If every single family member in your household is not counted, some of your federal tax dollars will not be invested locally and will categorically go towards other states in the Union.

Completing the Census sends a clear message. When we complete the Census, we are telling the federal government that our communities deserve more funding for the betterment of our neighborhoods. Our region, Inland Southern California, has an unfortunate history of being left behind, without its fair share of funding, or even a seat at the table. We only get one chance every ten years to directly impact our region’s future. As a community, this is our chance to fight for our region’s fair share. We need everyone to fill out the 2020 Census. Take a few minutes today to fill out the Census and help build a brighter future for not only today’s generation, but also every generation that follows.

Make sure that not just you, but your children are counted in the Census. It is too important for their futures to forget!