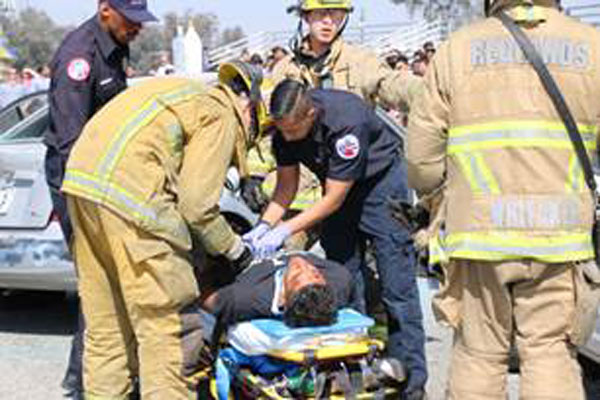 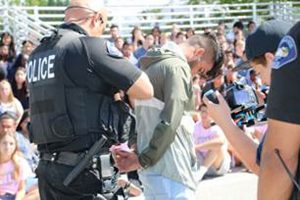 Redlands Police and Firefighters participated along with Citrus Valley High School, the San Bernardino County Sheriff’s Department, the California Highway Patrol, American Medical Response and others in “Every 15 Minutes,” a chillingly realistic demonstration of the dangers of drinking and driving, Thursday, April 26.

Police and fire crews responded to a mock accident in front of the high school. As students in bleachers watched the tragedy unfold, firefighters extricated several victims, including one who was pronounced “dead” on the scene and taken away in a coroner’s van. Other victims were airlifted by CHP helicopter or transported by American Medical Response ambulance.

After performing a Field Sobriety Test, police “arrested” the teen driver, placed him in handcuffs and into the back of a patrol car.

During the morning, 25 preselected students were taken out of classes every 15 minutes by the grim reaper and his or her obituary read aloud, representing the statistic that someone in the United States is killed or injured by a drunk driver every 15 minutes.

Students spent the night at an overnight retreat, representing the separation from their families. Students and parents each wrote letters reflecting on their lives and the things they never had a chance to tell each other.

A “memorial service” school assembly was scheduled the next day at the school, which included a video of Thursday’s events, reading of the “farewell” letters and a guest speaker whose wife and children had been killed by a drunken driver.