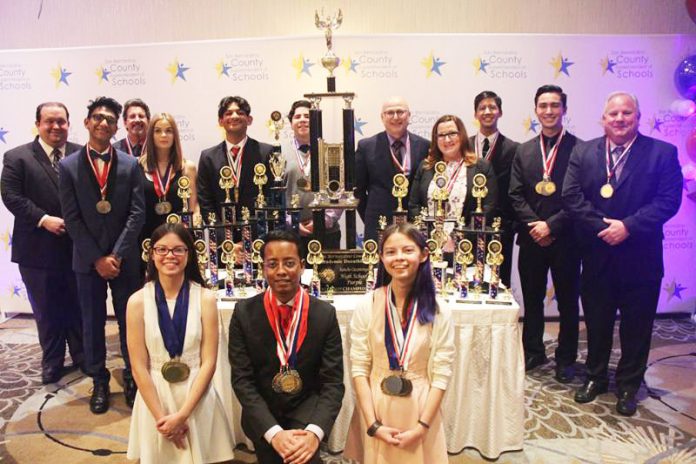 After finishing second for the past two years, Rancho Cucamonga High School (Purple) vaulted to its first-ever title in the 36th annual San Bernardino County Academic Decathlon in record-scoring fashion.

With 53,538.5 points, Rancho Cucamonga broke the record that rival Chaffey set a year ago in winning its seventh-consecutive Academic Decathlon championship. Rancho Cucamonga, led by coach John Nath, has been so close in recent years to winning the title, finishing second to Chaffey in both 2018 and 2017 before capturing this year’s crown.

In this year’s county competition, Rancho Cucamonga slipped past Redlands (Blue), which had 48,949 points as the county runner-up. Defending champion Chaffey (Black) was third with 46,600.6 points, followed by fourth-place Don Lugo (Brown) with 42,101.8 points and fifth-place San Gorgonio (Black) with 38,510.9 points. Redlands and Chaffey also advanced to the state competition.

Rancho Cucamonga bested the two most successful programs in the county’s Academic Decathlon history, as Redlands (13 titles overall) and Chaffey (nine titles overall) had combined to win every county championship since 2005 prior to this year. Rancho Cucamonga also became the fourth different school from the Chaffey Joint Union High School District to win the championship, joining Chaffey, Etiwanda and Alta Loma as champions.

In this year’s county competition, there were 46 teams representing 24 high schools that participated. Teams, as well as about 450 individuals that participated in the competition, were recognized with certificates, trophies and gold, silver or bronze medals at the awards ceremony that was held at the DoubleTree Hotel in Ontario on Feb. 6.

The academic competition took place on two consecutive Saturdays on Jan. 26 and Feb. 2 at Los Osos High School in Rancho Cucamonga. The scholastic contest pitted students against one another in 10 subject areas.

Teams were composed of nine students, three each from grade point average categories of  “A” (Honors), “B” (Scholastic) and “C” (Varsity). There were written tests in the areas of math, economics, science, language/literature, music, art and social science. Students also wrote an essay, faced a panel of interviewers and gave impromptu and prepared speeches. In the last event of the competition, Redlands (Blue) won the Super Quiz, a team college-bowl contest.