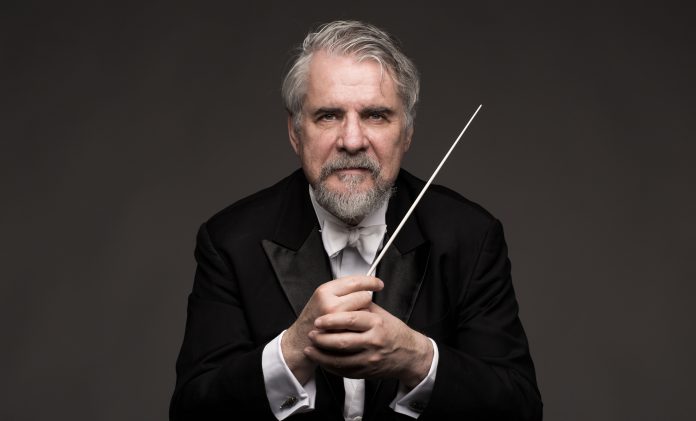 The Redlands Symphony has announced an agreement with Ransom Wilson, the orchestra’s Music Director and Conductor, on a new contract that will extend the Maestro’s role with the Symphony through 2024.

“The board and I have been very happy with Ransom’s work at Redlands Symphony,” noted Board Chair, Jerry Bean, about signing the new contract, “He has brought new energy to the orchestra and an artistic vision that has received broad acceptance from our audience members.  The renewal and extension of Ransom’s contract is just another sign that Redlands Symphony continues on a path of sustainable stability,” Bean said.

“Working for the past three years with the incredible musicians of the Redlands Symphony has been a pleasure and a privilege,” according to Maestro Wilson, “Our staff and volunteers are second to none, and I love every new adventure with our audience.  Knowing this will all continue for five more years makes me very happy!”

Maestro Wilson was officially announced as the Redlands Symphony’s new Music Director and Conductor on June 4, 2016.

He has appeared as guest conductor with many major orchestras, including the Saint Paul Chamber Orchestra, the Houston Symphony, the Denver Symphony, the San Francisco Chamber Symphony, the Orchestra of St. Luke’s, the Krakow Philharmonic, and the London Symphony. Ransom Wilson led a successful tour of Southern California with James Galway and the Los Angeles Chamber Orchestra, and he has accompanied dozens of internationally-renowned artists from the podium, including Itzhak Perlman, André Watts, Frederica von Stade, Joshua Bell, and Hilary Hahn. He has also gained a reputation as an opera conductor, serving on the conducting staff at New York’s Metropolitan Opera and conducting for Glimmerglass Opera, New York City Opera, and the International Opera Center in Amsterdam.

Wilson has appeared as flute soloist with the Chicago Symphony, Philadelphia Orchestra, San Francisco Symphony, London Symphony. He has released 27 albums as a flute soloist and 11 as a conductor, winning three Grammy nominations along the way. His newly released recording, on the Nimbus Records label, is Four French Flute Concertos, with the BBC Concert Orchestra.

In addition to his ongoing professorship at Yale University, he taught master classes at the Paris Conservatory, Oberlin Conservatory, Jerusalem Music Academy, and at 8 music schools in Taiwan. He also conducted and performed at Chamber Music Northwest in Portland, the Marseille Conservatory in France, Carnegie Hall in New York, with Camerata Pacifica all over Southern California, at the Chamber Music Society of Lincoln Center, a series of recitals in Israel, and recording sessions in Wales, UK with celebrated pianist François Dumont. Maestro Wilson will conduct the Redlands Symphony in the final concert of its 2018-19 season on Saturday, May 18, 2019 in a program titled The Glorious Gift of Birds, featuring international flute player, Sara Andon, performing VIVALDI’S Concerto for Flute in D, op. 10 no.3 “Goldfinch.”  The concert will be performed in Memorial Chapel on the campus of the University of Redlands.  The concert begins at 8 PM.  Doors open at 7 PM.  More information and tickets are available at www.redlandssymphony.com or by calling the Box Office at (909) 587-5565.