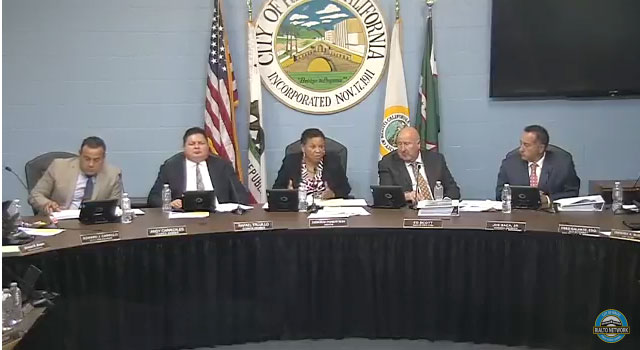 On September 22, Rialto City Council agreed to table what could have been a 10 percent merit increase.

“The California Statutory increase of elected official’s salary includes the mayor, city council, city clerk and treasurer. Under state law, local elected officials are entitled to a five percent increase in stipend salary per year,” said Eric Vail, interim city attorney. “The elected mayor’s base salary being 150 percent of the council’s base salary. Then clerk and city treasurer’s salary being 75 percent of the council base.”

“What we have submitted to you for your discussion tonight is an ordinance which includes the 10 percent and adjust the salaries under California Government State Law,” continued Vail.

Mayor Deborah Robertson expressed that there has been some confusion as to when and how often the Rialto City Council and council staff should be taking action on the merit increases.

During public comment, Lupe Camacho, candidate for mayor, expressed her discontent at the thought of city council accepting a 10 percent merit increase.

“Being the individuals that are elected by us, and you sit here because of our votes, I think it would be unwise to take the 2.5 percent, being that we do have to deal with the unfunded liability, there’s infrastructure to take care of, our city is very back logged, and it’s going to cost a lot of money for our city to begin to see some improvement,” Camacho said.

“Why was the decision made to increase by five percent, opposed to the 2.5 percent we approved to give our employees in the city’s general unit and management unit? My question is to you mayor, did you request the five percent increase,” asked Camacho.

Robertson was quick to very succinctly respond by stating that it’s the council’s duty to address the merit increase item every year.

“I requested the item because it’s an item we have to address every year. If we don’t address it every year, it becomes cumulative. When we don’t address it yearly, by the time you do take action, you’re subject to have more than one year, two or possibly four years. There’s been confusion on when this item is supposed to be taken; that is the reason why this item has been brought forward,” said Robertson.

During discussion, Councilmembers Joe Baca Jr. and Rafael Trujillo expressed that they could not support the merit increase at this time.

“To clarify, the five percent merit increase comes directly from the government code itself. It’s the maximum amount of salary increase that council can have in any one particular year. My office does not have any authority to decide what your compensation will be; it’s just a part of the government code. Now, the council is not obligated to accept the five or 10 percent, that is part of council’s discretion. I apologize for this item coming so late in the year,” concluded Vail.

Council chose to table the item; there is no definitive date set on when the item will be brought forward again. For more information, visit https://www.yourrialto.com.