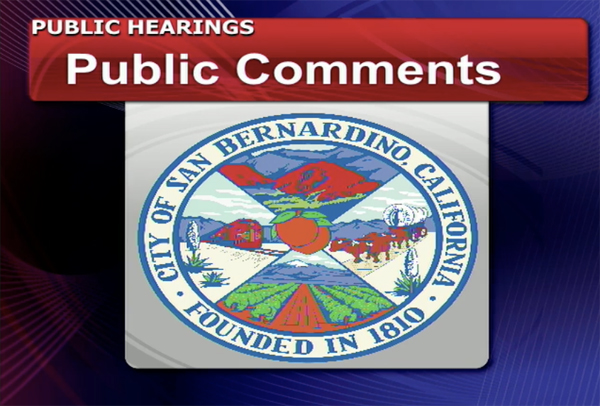 On October 7, San Bernardino City Council discussed issues in regard to recent written public comments from constituents, not receiving adequate time and opportunity to be heard.

Since the start of COVID-19, Governor Newsom issued Executive Order N-29-20 to allow public members to observe and submit public comments through teleconference or other electronic means or combinations thereof.

The issue lies in a space where not every constituent has access to teleconference methods, while many constituents rely on writing a letter or email to be read during public comment, via a council-member or city staff…but allegedly, it has become time consuming.

“At the September 16, 2020 Mayor and City Council meeting, after considerable discussion regarding whether or not public comments submitted to the Mayor or individual Council Members should be read aloud by staff or elected officials, the City Clerk was directed to bring an item before the City Council to consider a policy regarding the reading of written comments,” said City Clerk Genoveva Rocha.

The council argued the importance of being Americans with Disabilities Act (ADA) compliant…providing all constituents a viable opportunity to be heard…whether it’s via voicemail, a letter, or email.

“I have a specific member of my constituency who cannot speak anymore. This individual cannot hear, she cannot call in, she has asked me to read items into the agenda or public comment, occasionally. She has a right to be heard,” said Councilmember Henry Nickel.

“Her message should not be buried in unread public comments. I, as her councilmember, have an obligation to ensure that she is heard. We cannot deny the public the right to be heard, simply because they cannot call in or because they want to remain anonymous…all of these methods are allowed under our Brown Act,” continued Nickel.

One struggle council has been facing for some time, especially during remote council meetings, is automated script-like public comments; which are usually submitted by the dozens, are required to be read out loud and time consuming for council.

“I think the biggest issue here is, if I have a constituent asking me to read a letter into the record…I feel as if I have an obligation to read it into the record. Maybe we can look into separating repetitious, script sounding public comments; and read one of them and share how many public comments we received regarding that item,” shared Councilmember James Mulvihill.

Currently, all constituents sharing a public comment are allowed three minutes to speak…but since so many recent public comments have been provided via a letter or through email to be read aloud, it was noted that all public comments are not receiving equal time.

When council recommended extending the length of the bi-weekly council meeting to provide every constituent’s public comment an equal three-minute opportunity to be heard, Mayor John Valdivia explained that the council position is not a full-time job.

“There are four of seven councilmembers who have full-time jobs and this is not a full-time position. Furthermore, we are here to conduct city business. This is not a general public comment portion, where its open mic. We have to conduct the business of this city to move policy and procedure forward,” said Valdivia.

City staff was directed to utilize council’s direction and recommendations to enact an ordinance in regard to policy procedures for written public comments to present at a future city council meeting.