“This decision is paramount in the continued effort toward rehabilitating the Waterman Corridor in San Bernardino,” said City of San Bernardino Mayor R. Carey Davis. “This is a testament to the power of community collaboration. With the support of our partners, we will continue to pursue safe and stable communities for our residents and families to thrive.”

The contribution via AHSC’s implementation of a statewide program uses Cap-and-Trade dollars for projects that improve public health and the environment in disadvantaged communities. The $20 million will help fund two upcoming phases of Arrowhead Grove at North Waterman Avenue and East Baseline Street, compromising 147 affordable housing units and 36 market-rate units, along with pedestrian and transit improvements that will benefit the community-at-large. Upon completion, Arrowhead Grove will include about 400 units as well as community amenities like a pool and clubhouse, upgraded infrastructure, walking paths, a community garden and a computer lab for residents.

National Community Renaissance (National CORE), one of the nation’s largest affordable housing developers and the general contractor for the project, is working in partnership with the Housing Authority of the County of San Bernardino to transform the Arrowhead Grove neighborhood.

“None of this would be possible without the collective commitment of the City, the Housing Authority of the County of San Bernardino (HACSB) and every stakeholder, funder and agency that have dedicated themselves to turning this dream into reality,” said Steve PonTell, president and chief executive officer of National CORE. “We are grateful for the SGC and the AHSC support and we are eager to move forward with the next stages of this transformative effort to rebuild San Bernardino block by block.”

“There is a critical need for affordable housing in San Bernardino County,” said Supervisor Josie Gonzales, whose Fifth District includes Arrowhead Grove. “We owe a great deal of thanks to our legislative delegation, the HASCB, National CORE, other county agencies, and the City of San Bernardino for the hard work they put into acquiring this vital funding source.” 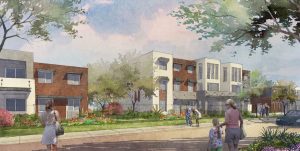 Two initial phases of the Waterman Gardens redevelopment have already been completed. Valencia Vista, the first phase with 76 units, opened to residents in December 2016. A little more than a year later, Olive Meadow, the second phase with 62 units, opened in September 2017. Both have earned recognition from the National Association of Housing and Redevelopment Officials, and the Affordable Housing Tax Credit Coalition, among others, for the transformative impact on the lives of residents and the community at-large.

“This was a collaborative effort with so many partners,” said Housing Authority of San Bernardino County’s Executive Director Maria Razo. “We are extremely grateful for the opportunity to effectively invest and leverage our dollars to achieve the vision of affordable housing and active transportation options that improve the health and well-being of the residents who live in the area.”

With this advancement and the continued momentum of the developer, agencies involved are hopeful that Arrowhead Grove’s construction will break ground in late 2018 or early 2019.