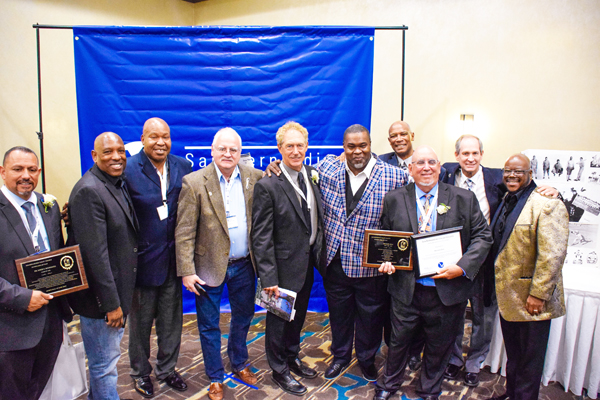 San Bernardino Valley College is proud to usher in distinguished graduates to the Alumni Association and Athletics Halls of Fame, each recognized for their prize-winning accomplishments and service to the community. SBVC Foundation Board President Beverly Powell said the Foundation is honored to partner with the Athletics department to laud the achievements of SBVC alumni and former student-athletes.

“The opportunity to showcase some of Valley College’s best ‘success stories’ not only helps the Foundation raise funds necessary to help students achieve their dreams – but events highlighting our alumni also help inspire our current SBVC students to envision their own success and believe their own dreams are possible,” she said.

Inducted into the SBVC Alumni Association Hall of Fame is Dr. Louie F. Rodríguez, interim dean of the Graduate School of Education at UC Riverside. He received recognition for being a catalyst for many academic initiatives to benefit the community. He also serves as Bank of America chair in Educational Leadership, Policy, and Practice in the UCR Graduate School of Education. Among numerous awards and various posts, Dr. Rodriguez is also the Founding Director of the Center for Educational Transformation at UCR. His educational foundation began at SBVC. Later transferred to California State San Bernardino, where, as a McNair Scholar, he focused on research to help historically marginalized students.

From there, Dr. Rodriguez became a high school math teacher, and holds two master’s degrees, along with a Ph.D in Administration, Planning and Social Policy from Harvard University. With his first years at SBVC campus, he recalls the indelible impact of a caring guidance counselor, Laura Gomez. He feels the primary objective for all students is to make the most of their academic goals, while never forgetting about what’s most important in life.

“Students, know who you are, identify a mentor, get connected to programs, dream big, surround yourself with excellence, and be a leader. After you graduate from SBVC, always find ways to give back to your community,” says Dr. Louie F. Rodríguez.

Inducted into the SBVC Athletics Hall of Fame are Kenneth Blumenthal, Michael Sola, Stan Sanchez, Eric Swanson, and 1982 SBVC Championship Football Team. Each of these athletes are acknowledged for both dedicating themselves to excellence in their sport, and also for their impact on the community and students.

Former San Bernardino Valley College coach Kenneth Blumenthal has run the ball from the early days as captain of the Eisenhower High School football team in Rialto, and later as a student-athlete at San Bernardino Valley College. Through his journey, Blumenthal credits close friends, colleagues and faith for support through his remarkable athletic career at SBVC, where, under Head Coach Bob Smith, he set an unrivaled three-decade record for the most tackles in one season.

Following great success at the local campus, a football scholarship paved the way to Long Beach State, where Blumenthal earned his bachelor’s in recreation, and another Bachelor’s in kinesiology. He also holds a teaching credential from California State University, San Bernardino. Among his many posts, Blumenthal served at Rialto Frisbee Junior High and his alma mater Eisenhower High School. He also holds a Master’s degree from Azusa Pacific University, and coached track in 1988 until he became full-time Defensive Coordinator/Head Track Coach in 1990. He is unmatched for conference championships. No other head coach has taken home as many wins as Blumenthal at SBVC, to which he acknowledges colleagues and coaches that have backed him along the way.

“The reason Valley College has produced so many championships is because, for the most part, our athletes are just plain tougher than most of our competition,” said Blumenthal. “Many of the student-athletes who come to Valley have faced tough times, but they are overcomers. They are thankful, respectful and proud to be here. I loved working to help them make their dreams come true.”