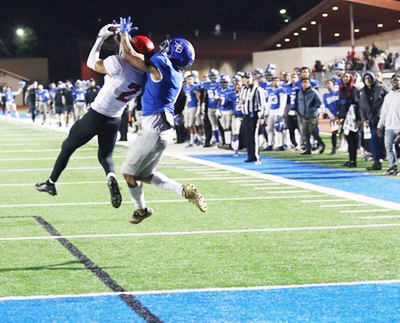 San Bernardino Valley College hosted its first bowl game in known history, as the SBVC football team went to the American Championship Bowl for the second year in a row.

Though the Wolverines lost to Chaffey College 33-20, record-setting quarterback Jeremy Moussa led the team in all-conference selections. Moussa was named Co-Offensive Player of the Year after appearing in four conference games, amassing 1,177 yards passing and 14 touchdowns. Overall, the freshman finished the season with the second-best single campaign in school history.

Two Wolverines were honored twice by the all-conference selections. Sophomore Darrell Turner Jr. was a unanimous pick for first team honors at running back, while freshman Ben Falck, who has already received a scholarship offer from the University of Arkansas-Pine Bluff, was unanimously chosen as the first team kicker and punter by coaches.

The Wolverines’ defense was also well represented in the first-team selections. Defensive tackle Jess Ybarra led the team with nine sacks, while defensive end Damen Studsill was third on the team with 48 tackles.

Outside linebacker Montre Moore led the team with 58 tackles on the season, including five sacks and 10.5 tackles for losses. Cornerback Claude Dent, who had four interceptions, closed out the first-team selections on the defensive side.