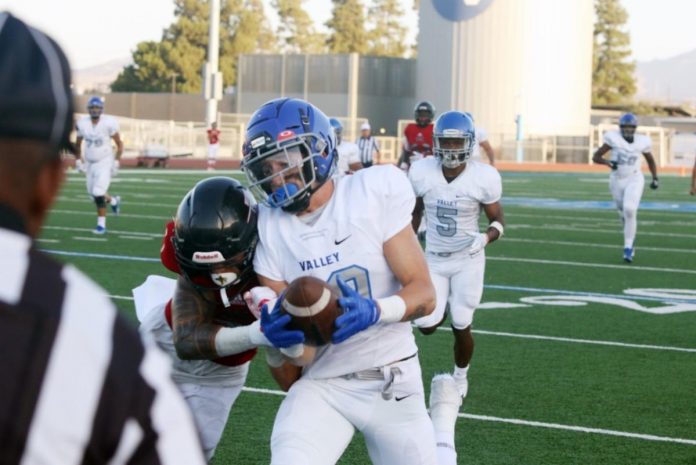 After a 2018 season that saw the San Bernardino Valley College football team rewrite the record books, the 2019 team picked up right where the 2018 team left off breaking 10 records in a single night during the first game of the season on Sept. 7. The Wolverines took on Santa Ana College, defeating the Dons 80-48 in the SBVC Stadium.

Quarterback Jeremy Moussa completed 38 passes for 636 yards and seven touchdowns as the Wolverines beat the Dons 80-48 Saturday night at SBVC Stadium. Moussa threw passes to 10 different players, with six different receivers scoring touchdowns. The 636 yards surpassed the school record for passing yards in a game, previously set at 495 yards in 1991 by Richard Robles. Moussa’s seven touchdown passes also ties Armando Herrera for most in a single game, which Herrera completed twice in 2018. And the 38 completions also set a new mark, besting Jamie Sander’s 1994 mark of 33.

But it wasn’t just the Jeremy Moussa show Saturday night. Running back Darrell Turner Jr. scored three times, gaining 106 yards on eight carries on the night. In all, the Wolverines ran 90 plays, gaining 792 yards – itself another record, besting the 1991 team’s mark of 673 set against East Los Angeles College.

Things were far from perfect for the Wolverines on the night. The defense allowed Santa Ana to gain 448 yards on the night, allowing the 48 points. And SBVC had troubles keeping flags off the field in the game, committing 25 penalties for 320 yards.

The Afro exhibit opens at the County Museum