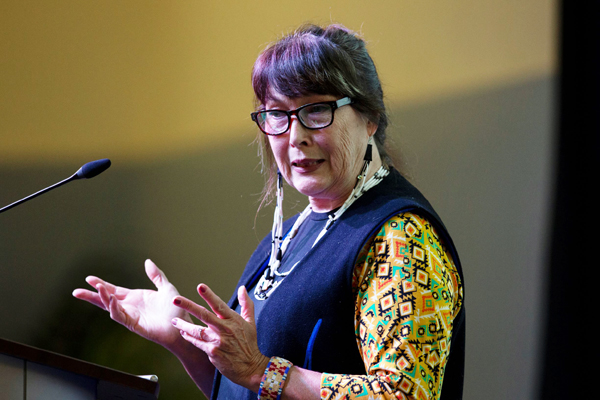 Teters discussed the harm that comes with stereotypes and how Native nations must compete with mass media imagery, such as Disney and the military’s use of their historical heroes as code for the country’s enemies.

“There are more than 500 Indian nations within the United States,” Teters said. “We all have our rich history, language and culture. To turn us into stereotypes is to stop seeing us as individuals and traps us in someone else’s mistaken idea of who they think we are. These images are so powerful that non-Indian people do not see us as modern people with a valued history, a living culture and language, and a future.”

Teters also discussed the issues that come with organizations using Native Americans as mascots, particularly schools, which then graduate people who go on to become teachers, judges, governors and presidents who impact Native communities no matter where they live.

“When school teams use us as mascots, it goes against education’s highest goals. Teach history. Not reinforce stereotypes of any people,” she said. “Racial stereotypes dehumanize. Period.”

Teters established the Racial Justice Office at the National Congress of American Indians and is a founding board member of the National Coalition on Racism in Sports and the Media (NCRSM). The television documentary “In Whose Honor?” focuses on her efforts involving the University of Illinois, its mascot and accompanying issues of racism, stereotypes, minority representation and the effect of mass media imagery.

Teters has held solo exhibitions of her work since 1992. She was the first artist-in-residence at the American Museum of Natural History in New York City. Her awards include the Allen House Memorial Award / New Mexico Governors Award, Person of the Week in 1997 for ABC World News Tonight with Peter Jennings and the Chalmers Memorial Award from the American Civil Liberties Union. The award-winning documentary by Jay Rosenstein, “In Whose Honor?” provides a history of her work.

She is academic dean at the Institute of American Indian Arts (IAIA), and has held positions at the Ohio State University and as the Hugh O. LaBounty Endowed Chair at the California State Polytechnic University in Pomona.

Additional information about Teters can be found on her website at charleneteters.com.