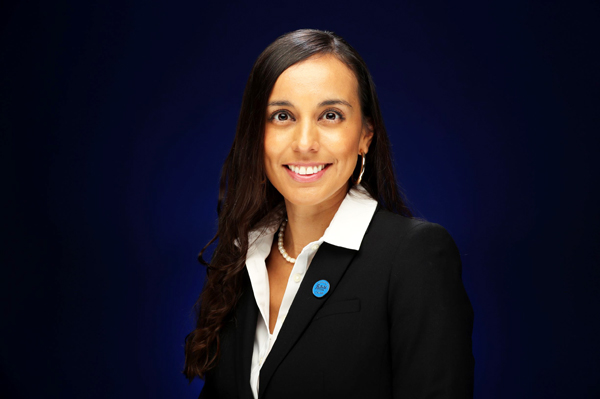 Angie Denisse Otiniano Verissimo, an associate professor in the Department of Health Science and Human Ecology at Cal State San Bernardino, was selected for the Wilmer Amina Carter Award from Assemblymember Eloise Gómez Reyes’ (D-San Bernardino) office for her continued service to the Inland Empire community.

She received the award during Reyes’ 30 Under 30 Award Ceremony and Art Showcase on Aug. 17 in downtown San Bernardino.

The 30 Under 30 program was established by former Assemblymember Wilmer Amina Carter, a CSUSB alumna and retired CSUSB staff member. The event honors 30 individuals under the age of 30 who exemplify dedication, innovation and service in the community, and live, volunteer or work in in the 47th district, which includes all or portions of Colton, Fontana, Grand Terrace, Rialto and San Bernardino, as well as the unincorporated communities of Bloomington and Muscoy. This year, nine of the 30 awardees are CSUSB alumni.

Verissimo, who grew up in Muscoy and Rialto, was a recipient of a 30 Under 30 award in 2008, when Carter represented the district.

Verissimo said she was honored to be selected for the Carter award, adding that receiving the 30 Under 30 award in 2008 “was a pivotal moment as it provided me the opportunity to meet then-[CSUSB] President Albert Karnig as well as faculty who encouraged me to apply for a faculty position at CSUSB in the future.”

Carter nominated Verissimo for the 2019 award.

“The Honorable Wilmer Amina Carter has continued to be a strong supporter who has helped shape my career and trajectory,” she said. “She attended my Yotie Talk at CSUSB in March 2017, which focused on the impact of discrimination on health, and has remained in contact as we have established a group for Women of Color in Academia on our campus.”

Verissimo’s “Does Discrimination Impact Health?” discussion was part of the Yotie Talks speaker series that was launched by CSUSB’s Diversity Committee to discuss current issues that are critical to the campus and create a space for dialogue for students, faculty and staff.

As faculty co-advisor of the CSUSB chapter of Eta Sigma Gamma National Health Education Honorary Society, she helped organize the Run Like A Mother 5K, which was designed to raise money and awareness for nonprofit community organizations dedicated to improving the lives of women and children by providing resources, programs and services.

As a co-chair and co-founder of CSUSB’s Women of Color in Academia, Verissimo helped organize “A Seat at the Table: Intersectionality in Higher Education,” a 2018 panel discussion that focused on the experiences of women of color on navigating the academic field and overcoming challenges throughout their career.

This past May, Verissimo gave a talk on achieving faculty diversity during “Building a Shared Vision: Creating an Inclusive Environment,” a retreat for members of the CSUSB faculty senate, deans, department chairs, faculty and university administrators to discuss equity gaps on campus and ways to close them.

Verissimo’s research examines how discrimination and other social determinants of health contribute to health disparities, particularly among Latinx populations. She has published her research in the American Journal of Public Health and co-authored a chapter in The Cost of Racism for People of Color: Contextualizing Experiences of Discrimination published through the American Psychological Association.

She was recently awarded tenure and promoted from assistant professor to associate professor.

“Dr. Verissimo is first-rate scholar who has published important research on social disparities, and she is an excellent and dedicated instructor who is well-liked by her students and advisees,” said Claudia Davis, interim chair of the Department of Health Science and Human Ecology. “We are very happy to have her as a colleague, and she is well-deserving of this award.”