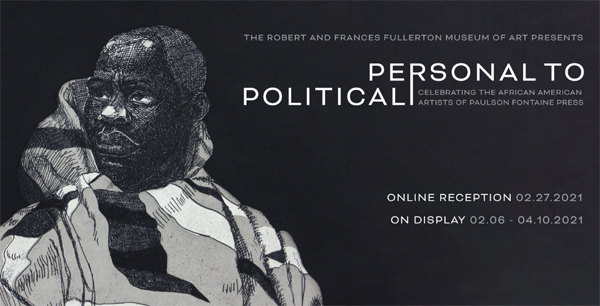 In celebration of Black History Month, the Robert and Frances Fullerton Museum of Art (RAFFMA) at Cal State San Bernardino presents “Personal to Political: Celebrating the African American Artists of Paulson Fontaine Press.” The exhibition will be on display virtually starting Saturday, Feb. 6, and will run until Saturday, April 10. A formal online reception will take place on Saturday, Feb. 27 at 4 p.m.

This exciting exhibition features works by African American artists who have helped to shape the contemporary art conversation in the Bay Area and beyond. The show covers a wide range of prints, paintings, quilts and sculptures, and includes an array of abstract and formal imagery. Narratives that speak to personal experiences and political perspectives are woven throughout.

At the heart of this show is a Berkeley-based fine art print studio – Paulson Fontaine Press – who over the past two decades has developed an unparalleled roster of internationally celebrated artists, such as Martin Puryear, Kerry James Marshall, and the Gee’s Bend Quilters, who characterize the fresh perspectives that are today’s avant-garde.

This exhibition is organized by the Bedford Gallery and will travel nationally through 2021.

About Paulson Fontaine Press
Established in Emeryville in 1996, Paulson Fontaine Press, formerly Paulson Bott Press, is known for amplifying important, often underrepresented, voices in the visual arts. In 1997, after hearing the painter Kerry James Marshall give a talk about the dearth of Black voices and representation in major museums and art institutions, co-founder Pam Paulson realized there was a vacuum to be filled.

Through their fine art publishing program, Paulson Fontaine Press reaches new audiences for African American artists across the country. Artists include Chicago-based McArthur Binion, who is known for bringing a personal narrative into the reductive materialism of minimalism; Samuel Levi Jones, known for compositions created from deconstructed institutional texts; Bay Area artist Lava Thomas, whose multidisciplinary practice considers themes of social justice, female subjectivity, current events and the shifting tides of history; and Edgar Areneaux, a Los Angeles native who has been a pivotal leader of the Watts House Project, an effort to revitalize the Watts community through art.

About the importance of this focus at the press, Rhea Fontaine, co-owner of the Paulson Fontaine Press, states: “People like William Arnett, who supported the Gee’s Bend Quilters, and Lowery Stokes Sims, whose pioneering work at the Metropolitan Museum and the Studio Museum in Harlem introduced so many minority artists to larger audiences-these are the people who are taking risks that others aren’t willing to take, saying things that other people aren’t willing to say, seeing things that other people are not seeing. We’ve always tried to connect ourselves with that type of visionary. Because of them, a handful of these really talented artists have become known to us and the world at large.”

Gee’s Bend Quilters: Gee’s Bend is a small, rural African American community that is surrounded on three sides by the Alabama River. The women of Gee’s Bend create quilted masterpieces that are both functional and unique, and combine artisanship and ingenuity. Their storied crafting tradition dates back to the 1920s, and their works – created out of necessity for their homes – are an inspiring and vital part of American art history. In addition to prints, this exhibition includes quilts by the Gee’s Bend Quilters.

David Huffman: David Huffman depicts the African American experience and “the stereotypical signifiers of this history.” He uses humor to bridge fantasy and reality with his depictions of figures in astronaut garb (known as Traumanauts), conducting their daily activities. On the surface, some of the Traumanaut images are playful, but a deeper look reveals Huffman’s perspective on politics, culture and our relationship to the earth and urban environments.

Kerry James Marshall: Born in Alabama in 1955 and raised in Watts, Los Angeles, Kerry James Marshall’s work delves into the history of African American identity. He explores political themes and focuses on Western art and its absence of black subjects. His paintings bring people to the forefront who have previously been invisible – the African American woman, artist, master and actor.

Martin Puryear: Sculptor, Martin Puryear’s love of natural materials and traditional crafting methods employ wood, mesh, stone and metal to create forms that resist identification. As one of the most lauded contemporary artists, Puryear’s work has been exhibited across the country at the MOMA New York and National Gallery of Art. His list of awards includes a Guggenheim Fellowship, a MacArthur Foundation award, the Gold Medal in Sculpture by the American Academy of Arts and Letters, and the National Medal of Arts.

Lava Thomas: Lava Thomas’s work is influenced by themes of social justice and feminist discourse, past and present. Her hair portraits and mirrored tambourines are quintessentially personal. They are also strongly political, depicting the nature of who we are and how we express ourselves to the larger world.

This online reception will take you through an in-depth audio and visual tour of the new virtual exhibition. Event special guests include Rhea Fontaine and Pam Paulson, owners of the Paulson Fontaine Press. At the end of the virtual tour, guests will participate in an open Q&A with Fontaine, Paulson, and John Fleeman, RAFFMA exhibition designer.

Registration and more information can be found at the RAFFMA’s Personal to Political webpage.

Carolyn Tillman: Reflections on 25 years of service, family history, and dreams for the future

Rec on the Road at Home engages Colton youth