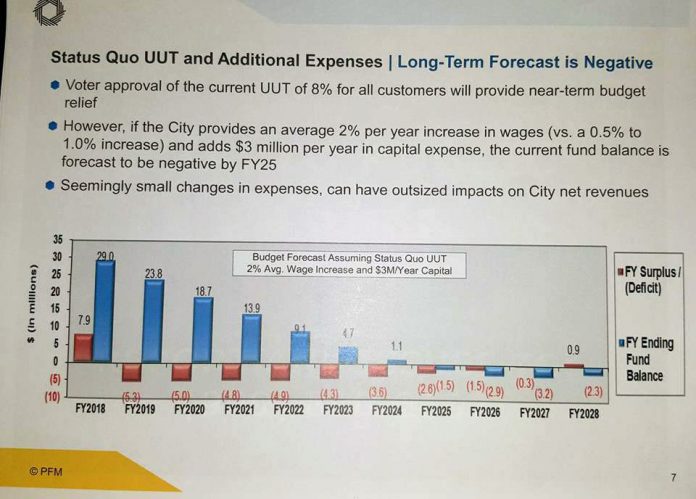 On July 24th 2018 a report by PFM, the contractor the city hired to perform long range budget forecasting, warned Rialto that they would find themselves in deficit spending if spending was not kept under control and a plan to deal with the growing PERS unfunded liability wasn’t addressed.

Rialto is still working out a plan to deal with the PERS unfunded liability and has kicked spending into high gear. Assistant City Administrator Robb Steel said, “We have had several meetings with the Ad Hoc Committee established to prepare a strategy but the report is still under development.”

On top of the $18 million on the upcoming work on Frisbee Park the city is moving forward with all capital projects, and is in the middle of a citywide solar program. One of the biggest warnings that PFM cautioned city leaders about was to show extreme caution when dealing with salary increases.

The city recently handed out the last set of enhanced salaries containing 8% increases, despite a warning from Russ Branson from PFM that indicated 2% raises would put Rialto at risk for deficit spending in Fiscal Year 2019.

During the December 11th council meeting the final group to receive these raises was the city’s management group that includes department heads and City Council. The largest standout was the employment agreement with Police Chief Mark Kling, whose salary increased from $191,276 a year to the top of the pay scale of $231,367 at the newly adjusted rate which doesn’t include the 8% raise that the new Police Chief will also receive. Fontana and West Covina police chief salaries top out at $212,004.

The first round of raises that the City Council approved were put into place to keep police officers from leaving the city for other agencies. Council tentatively agreed to raise police salaries in fiscal 2018-19 to bring compensation closer to market rates. The bump will add approximately $1.6 million to the 2018-19 budget including undetermined costs to future budgets, but officials expect the move to help the department retain and attract talent.

Even though median salaries for other police agencies were 18 percent higher than Rialto, the benefits Rialto gave to its employees were much better than other cities. Rialto resident and retired educator Cindy Freemont said, “That is the trade off when you work for a government agency – you either have higher pay or better benefits.”

Many of the city’s former Budget Advisory Committee members are questioning why the city spent so much on a long-range budget forecast only to ignore the warnings and do what they saw fit in the first place.

“In June the City passed a regressive permanent tax on the residents of the city because we needed the money to keep services open, police and fire personnel to keep our city safe,” stated Ana Gonzalez, former Budget Advisory Committee member. “Later that summer the council approved to increase park fees on families that play sports in city parks, because somehow we can’t afford to pay park lights.”

Other cities have figured out how they are going to deal with the financial burden associated with PERS.

“Fontana saw this coming and set up a special fund years ago to set aside money when PERS came asking for more,” said Fontana Councilman Jesse Sandoval.

“With almost over $150 million unfunded liability debt some questions have gone unanswered as to how we are going to pay the debt down,” continued Gonzalez. “After the election city council approved to raise their own compensation because they have not had a raise in many years, but if we cannot afford to pay city park lights and maintenance, and they have to raise fees (as a result), how can we afford to raise the compensation of our council members – that is not only fiscally irresponsible but will increase those unfunded liabilities.”