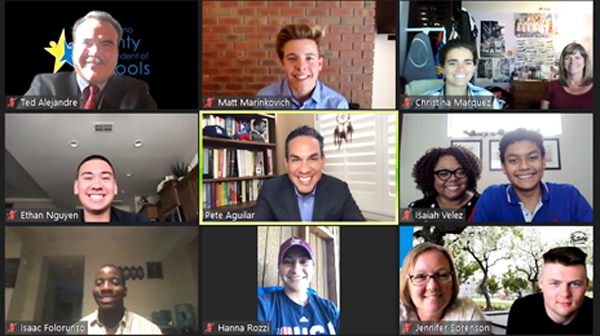 Rep. Pete Aguilar held a virtual send-off meeting on June 9 with Inland Empire students successfully nominated by his office to attend US Service Academies. In order to attend a service academy, students need to be nominated by their members of Congress. Students in CA-31 were nominated after a rigorous interview and application process that included interviews with local veterans and former academy attendees.

One of the students, Matt Markinovich from Redlands, first became interested in pursuing a career in service during a meeting with Congressman Aguilar on an 8th grade field trip.

“When I went on a field trip to Washington, DC in 8th grade, I learned a lot about what it took to build this country and what it takes to defend it. Meeting Congressman Aguilar and seeing Congress in action that day inspired me to think about how I could serve my own community and give back to the teachers, advisors and mentors who’d done so much for me. When the Congressman came to my high school a few years later to give us information about the service academy process, I knew that this was a way I could give back to the community and the country. Ever since then, my focus has been on service and I know the Naval Academy is going to give me that opportunity to serve and to lead. I’m excited to go to the academy, it feels right, like I’m on the right path,” said Markinovich.

Inland Empire students interested in applying to attend a US Service Academy can learn more on Rep. Aguilar’s website. Applications for the class of 2026 are due by November 1, 2021.