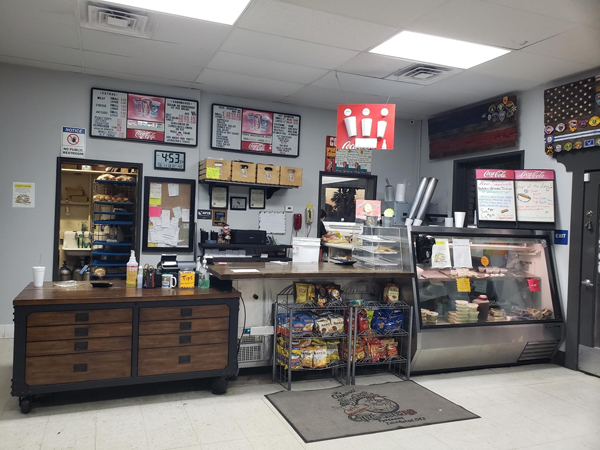 Inside a case on the wall, next to a handwritten menu and a map sketched by hand, hangs an old yellow card. The seller’s permit, dated September 1982, lists Heide and James L. Bentley as the new owners. A number of photographs all in black frames from those early days adorn the adjacent wall inside Butch’s Grinders.

The deli-style restaurant that originated in Fontana and opened in Riverside almost 40 years ago serves up hot and cold subs – “grinders,” as they’re called. Butch’s prepares specialty sandwiches with your choice of rye, sourdough or the ever-popular squaw bread, and the sandwich shop sells sides like salad and kosher as well as hot pickles.

Underneath an overhead canopy right outside the door, customers can sit at one of several tables to enjoy their orders.

Years ago, drivers accessed gas station pumps under the structure. Public records obtained from the Secretary of State indicate that in 1963, Douglas Oil Company applied for a permit for the building where Butch’s Grinders now stands, and an inspection permit shows Texaco Oil as the property owner circa 1971. James Lee Bentley would go on to sign an application for a permit in July 1982. Within weeks, a new Butch’s was born. A February 2021 financing statement confirms the business remains in the family and lists Kyle Bentley as the current owner.

Joey Sudbrack, a Riverside resident who visited Butch’s in early autumn, acknowledged the place has “a little history to it.”

Respect for roots and tradition, not to mention an exhibition of local pride, become apparent when one walks into the environment the Bentley’s built out of an old service station. A rustic wooden American flag decorated with insignia paying tribute to the likes of Cal Fire and local public service departments hangs above the door. High on the wall opposite the entrance, hang baseball jerseys. One reads number eight on the back and honors Jake Marsinic, an outfielder for the San Diego Padres who played high school baseball at Riverside Polytechnic.

Sudbrack commented on the “small town feeling” folks notice when they pick up food there. His partner said she appreciated the variety of soft and fresh breads available.

“We’re turkey and avocado people,” Sudbrack said in regards to the couple’s favorite menu item, noting that they typically get it on squaw bread. “We split it.”

A whiteboard sign inside advertises the “Soup of the Day,” like the periodically promoted tomato bisque. Another sign recently announced a new sandwich, Butch’s Ultimate Italian, which comes with cappicola, genoa salami, tomato, provolone, mortadella and more.

On display in a case beneath the signs, tiny cups of pepperoncini and jalapeno sit beside slightly containers of macaroni and pasta salad and nearby slices of cheesecake and other desserts.

Thomas Tivnen, an Orange County native who has resided in Riverside since 1995, complimented both the food and the service when he and his wife stopped by Butch’s Grinders one evening in late September.

The Bentley’s long-time pillar of the community located down the street from Ryan Bonaminio Park continues to serve up grinders to generations of satisfied sandwich lovers in the Inland Empire.