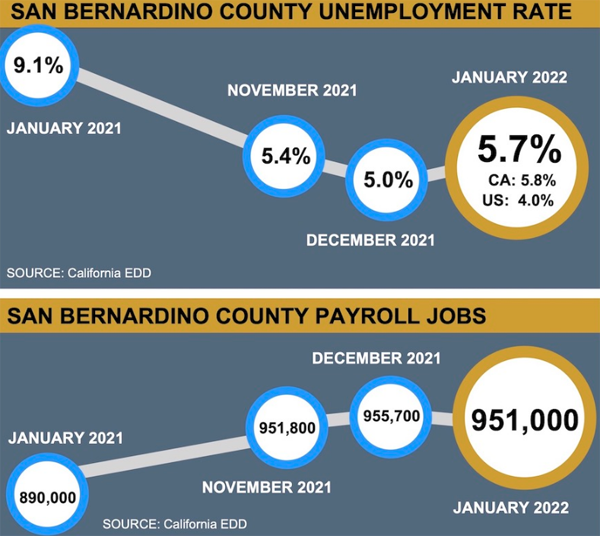 San Bernardino County’s job market has surged past pre-pandemic levels, with payrolls over 950,000 for the third month in a row, according to an analysis of newly released state numbers.

The California Employment Development Department reported Friday (March 11) that despite a typical seasonal uptick in the county’s unemployment rate from December to January, payrolls are now 13,000 above where they were in January 2020 – before the COVID-19 pandemic severely impacted the global economy.

Led by continued growth in the region’s supply chain industry and a resurgence in hospitality-related businesses, employers in San Bernardino County have now recovered all of the 130,000 jobs lost during the first two months of the COVID shutdown – plus some. Beginning in November, county payrolls have hovered about 950,000, according to a revised formula adopted by the state beginning with the January report.

The report also shows that the county’s labor pool has exceeded 1 million for the third month in a row, reaching a record 1,008,800 in January.

“These numbers speak to the strength of San Bernardino County as one of the country’s fastest-growing economic and population centers. We’ve got a supportive business culture and a growing, qualified labor pool – all of which encourages the kind of consistent economic growth we’re seeing,” said Curt Hagman, Chairman of the County Board of Supervisors.

According to the numbers, the unemployment rate in San Bernardino County rose to 5.7% during January – a fairly typical increase following the holiday surge. Even so, the county’s rate remains below the state average (5.8%).

The January jobs report follows recent studies that have shown a dramatic migration of residents from Los Angeles and Orange counties into the Inland Empire.

“The growth of our labor pool is great news for employers and the regional economy. Clearly, a big part of what we’re seeing are families and young professionals coming to San Bernardino County to pursue career opportunities and enjoy a quality of life they can’t get elsewhere,” said Phil Cothran, Chairman of the San Bernardino County Workforce Development Board.

Cothran encouraged job seekers to check out the services and resources WDD offers. Information on those services – including the three America’s Job Centers of California across the county – is available at: https://wp.sbcounty.gov/workforce/