The Military Explorers program has been shaping the lives of San Bernardino students and beyond, since 2013.

“The Military Explorers of the Inland Empire Post III is an after-school career pathways program sponsored by the Boy Scouts of America for students who are 12 to 20 years old,” said Public Affairs Officer SPC Simeone N. Miller.

The program mirrors US Army rank structure, it is supported by a staff of veterans, active duty service members, and former Explorers.

“Our mission is to provide America’s youth with easier access to military recruiters, ASVAB preparation, college ROTC scholarship and enrollment opportunities, and service academy and accessions information. More importantly, we teach leadership development, insight into what it is like to be in the military, the basic enlistment requirements, and hands-on technical training that mirrors certain US Army Military Occupational Specialties such as Public Affairs, Infantry, Military Police, and more,” said Miller.

Explorers not only wear the uniform, but earn ranks by taking tests according to regulation. They also advance by attending schools such as Non Commissioned Officer School and Officer Candidate School.

In its sixth year, the program currently holds 70 students in the program and it’s looking to continue growing now and in the future.

“The program has done a lot of great things for me, including making me feel like I belonged when I used to not feel that way back in middle school. During my time as a cadet, I learned a lot of important skills that I’ve taken with me as a Political Science major at Chaffey College and will continue to when I become a lawyer in the Army,” continued Miller.

“I learned how to better organize tasks assigned to me, delegate them, work in a team, and give that team direction. The program accomplishes this by placing cadets in a variety of leadership positions such as first sergeant, company commander, battalion commander, and battalion sergeant major. I myself finished the program as the Third Commander of the Explorers at the rank of Cadet Captain before taking my current position as an Assistant Advisor,” concluded Miller.

The Military Explorers Program of the Inland Empire hosts a meeting every first and third Thursday of the month, 5 p.m., at Sierra High School in San Bernardino; both students and parents are welcome. 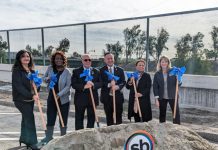