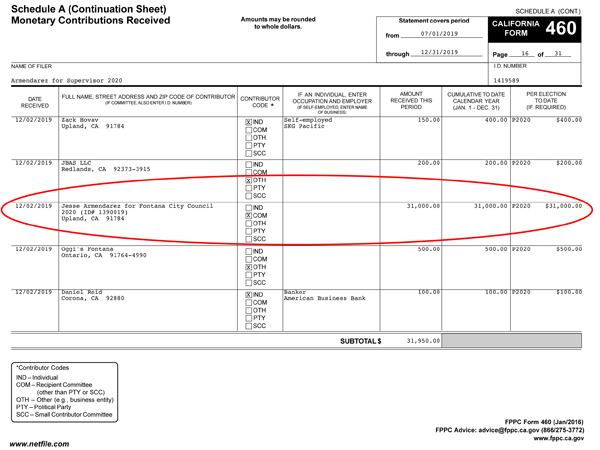 “Republican Jesse Armendarez has been caught hiding the source of his contributions in direct violation of California’s campaign finance laws,” said Chris Robles, Chairman of the San Bernardino County Democratic Party, “we’ve caught him lying to voters about being a Democrat and now he’s intentionally hiding from voters who’s paying for his campaign.  Armendarez is another cynical, lying, corrupt politician backed by secret special interests hiding in the shadows.”

Armendarez filed a campaign disclosure report showing a $31,000 transfer of funds from his Fontana City Council committee to his Supervisorial Committee without indicating the individual contributors of those funds purposely avoiding campaign contribution limits.

Not counting Armendarez’s personal loan, this $31,000 transfer represents a significant portion—almost 20 percent—of the funds raised by his Supervisorial Committee to date.

“The County of San Bernardino and the District Attorney’s office need to open an immediate investigation into this blatant abuse of campaign finance law,” Colton School Board Member and candidate for 5th District Supervisor Dan Flores stated in a press release. “Jesse Armendarez’s actions violated the law and the public has the right to know who is funding Armendarez’s campaign before Election Day.”

Armendarez did not respond to a request for comment.