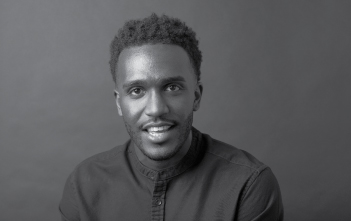 Nyle Fort, a minister, organizer and scholar, explored the COVID-19 pandemic and its effects on people of color during his virtual presentation on May 19 called “Pandemic and Privilege” as part of Cal State San Bernardino’s Conversations on Diversity series, hosted by the University Diversity Committee.

During his talk, Fort primarily focused on the disproportionate death toll, unemployment rate, police brutality and prison population among the African American community during the current pandemic, noting that COVID-19 has not been the great equalizer, as some have claimed.

Fort said these death rates only tell one part of the story.

“We have to realize that this is actually a much bigger narrative that had already been in place even before the pandemic struck,” he said. “So all of the preexisting inequalities have not been erased by the pandemic, but have been exacerbated by the pandemic.”

“Of course a disproportionate amount of those 30 million people are African Americans and people of color,” he said.

And to further the misfortune, those who have lost their job have also been experiencing skyrocketing rates of depression.

“The predominate number of essential workers – that is, bus drivers and nurses – are people of color,” he said. “So even those who are working are disproportionately affected even as they go to work, as they are more exposed to coronavirus, but also more exposed to the trauma that the virus itself brings.”

Fort also discussed the current case of Ahmaud Arbery, a 25-year-old black man, who, while out jogging, was chased down, shot and killed by two white men, a father and son, in Georgia. The father previously worked as a police officer and as an investigator for the Brunswick Judicial Circuit District Attorney’s Office.

“While that case is getting a lot of attention as it should,” he said, “I also want to put on the table that there is a wider pattern of police brutality that has only picked up during the crisis.”

However, Fort said he still sees a silver lining.

“Despite all of the death, all of the grief, all of the tragedy and trauma that we have experienced, and are experiencing, we’re also seeing black communities and other communities of color and our allies begin to reimagine what the world could be like in the midst of this tragedy,” he said, noting that neighbors are now learning each other’s names and offering help should they need it.

“We can’t return to normal if you want a more just world,” he said. “We have to reinvent the entire society that we’ve inherited. And the only way we can do that is if we imagine something different and then we struggle for the dream that we imagine.”

Recently, Fort became part of a project called “Masks for the People,” an organization that is giving away a million masks to black communities and other vulnerable communities “because we understand that not only black people are more vulnerable, but we also have less access to PPE (personal protective equipment).”

Based in Newark, N.J., Fort is an activist who is committed to global transformative justice. He traveled to Ferguson, Mo., to help build the Movement for Black Lives, a collective of more than 50 organizations representing thousands of black people from across the country. After his time in Ferguson, Fort created “7 Last Words: Strange Fruit Speaks,” a liturgy commemorating the last words of black people killed by police and vigilantes.

Additionally, Fort has focused on helping those in need, and established Newark Books and Breakfast, a monthly program that provides free books and breakfast to local youth and families.

Fort has spoken at various prestigious institutions, including Harvard University, University of Amsterdam, and the Malcom X and Betty Shabazz Center. In addition, his writings have been featured in academic presses, including Harvard Journal of African American Public Policy as well as Socialism and Democracy. He has also been featured in popular media outlets such as The Guardian, HuffPost and The Root.

Fort is a current Ph.D. student in Religion and African American studies at Princeton University. He received his bachelor’s degree in English from Morehouse College and his master’s degree in divinity from Princeton Theological Seminary.

The University Diversity Committee began its Conversations on Diversity series in spring 2005 and strives to bring three renowned speakers to campus on a specific topic of diversity each fall, winter and spring quarter. Topics include, but are not limited to, race, ethnicity, religion, women’s issues, gender and sexual orientation.

To learn more about the quarterly series, visit the Conversations on Diversity webpage.