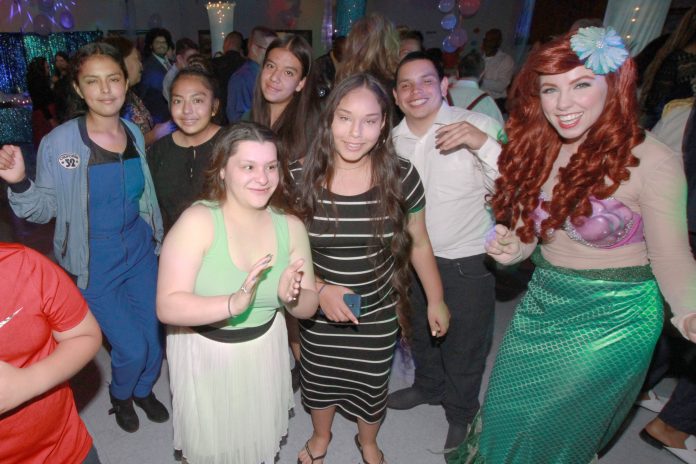 On Saturday, May 18, Friends of CID (Center for Individual Development) and the City of San Bernardino Parks Recreation & Community Services Department hosted the “2019 Under the Sea Prom” for several of its clients.

During prom clients and their family enjoyed several activities, the most popular of which was dancing!  No shy kids here, they were all on the dance floor, almost nonstop.  It took a small army of volunteers to help decorate the dance hall at the 5th Street Senior Center where the event took place.  Volunteers served food, refreshments, dessert, conducted a raffle handing out door prizes, and assisted at the photo booth.  The event was free of charge.  This special needs prom is an annual event that is hosted by “Friends of CID.”

In keeping with the “Under the Sea” theme, “The Little Mermaid” Ariel look-alike paid a visit to the prom.  Ariel interacted with clients and guests by dancing, posing for photographs, shaking hands, and giving kids hugs.

Friends of CID host several activities and fundraisers during the year.  Grapes & Gourmet is a food and wine tasting event featuring several vendors, restaurants, wineries, and breweries from the Inland Empire.  A live and silent auction is conducted to raise funds during the event.  Murder Mystery Dinner is an evening of fun and costumes and lots of guest participation.  Awards Night is held to recognize those who have helped in donating or volunteering during the year.

A prom king and queen were announced – Prom Queen was Brandi Guinn, and King was Johnathon Rose, both of whom were crowned by Ariel.