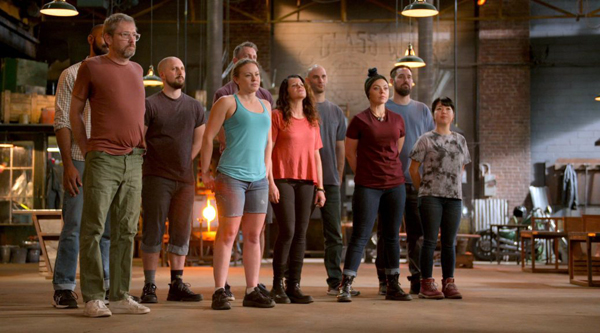 Blown Away features 10 master artisans who are given an art or design challenge each episode, with one contestant eliminated each time. The first season’s contestants were from the United States and Canada. The second season has gone global and now features glass artists from around the world.

“There was an equally interesting mix of contestants, and this time around, they were keenly aware of how being on the show could impact their career after seeing its impact on the contestants from season one,” Gray said.

The Corning Museum of Glass in Corning, New York, an esteemed partner of the series, is offering the Blown Away winner a grand prize of an artist’s residency at their museum following the competition. The museum is also hosting an exhibit featuring 10 works created on the show, one by each contestant.

“People really worked hard, got out of their comfort zones, and were surprising and ambitious in different ways,” Gray said. “And there were different personalities to respond and react to, even for me.”

Yamamoto, who received her Master of Fine Arts in studio art and design, notes that although she felt a lot of pressure and anxiety as a contestant on the show, she really enjoyed the overall experience.

“It was so much fun getting to know other talented artists, including the production team for the show,” she said.

As a student, Yamamoto worked in CSUSB’s glass-making facility where she “spent a lot of time playing with glass and making goblets.”

“I appreciated that CSUSB gave me so much freedom during the MFA program,” Yamamoto said.

“I feel so much connection to glass and I love how challenging glassblowing is,” she said. “We develop relationships with glass through so much practice and fails, and when I finally get to create something beautiful, the reward is worth devoting my life for.”

The second season of Blown Away is once again hosted by YouTube science influencer “Nickpedia” and former NBC’s America’s Got Talent contestant, Nick Uhas.

“I think for viewers who are newly fascinated by glassblowing that they are going to see some incredible things this season,” Gray said. “Even I saw some things that I hadn’t seen before!”

Visit the Blown Away Netflix webpage to view the trailer for the upcoming season.