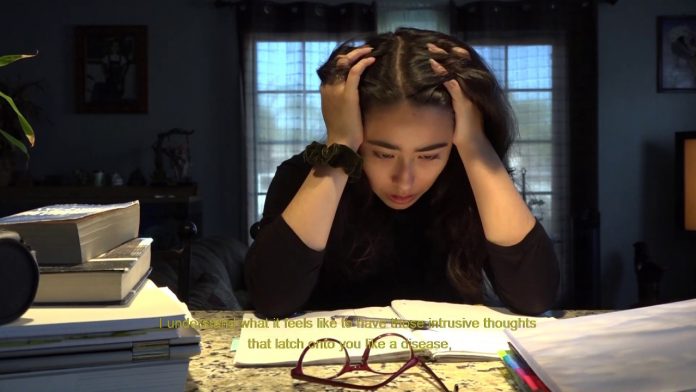 Summit High School senior Nicole Quinonez-Frias’ raw and emotional approach to highlighting cultural stigmas around depression and suicide, captured in a 60-second film, has earned statewide recognition as a category winner in the Directing Change Program and Film Contest.

Quinonez-Frias’ film captured first place in the Through the Lens of Culture – Suicide Prevention category. As a statewide winner, she will receive a $1,000 prize. She is the first Summit High TV Production student to win an event in the competition.

Her public service announcement (PSA) – titled “Our Story” – depicts Quinonez-Frias as a girl struggling with depression.

A Spanish voice-over, accompanied by English subtitles, expresses the girl’s fear of disappointing her family and highlights the stigma that can surround depression and suicide in the Latino culture. The film ends on a note of hope, with the girl realizing that her story does not end now and telling the audience theirs does not either.

The Directing Change program and film contest is part of Each Mind Matters: California’s Mental Health Movement. The program offers students an opportunity to lend their perspective to the movement by creating PSAs about suicide prevention and mental health, which are used to support awareness, education and advocacy efforts.

Quinonez-Frias plans to attend UC Riverside in the fall.