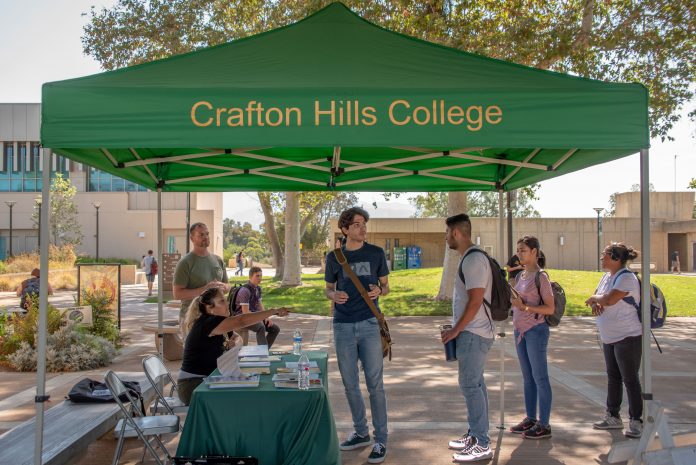 Days before the start of the fall semester at Crafton Hills College, faculty and staff congregated on campus for a day of conversation and idea planning at a scheduled In-Service Day.

Held Friday, Aug. 10, the event included remarks from officials of the San Bernardino Community College District Trustee Board and a keynote address by Robert Johnstone, founder and president of the National Center for Inquiry & Development, who spoke on guided pathways leading to student success.

Michael Strong, vice president of administrative services at Crafton, kicked things off by touting success stories on campus during the 2017-18 school year, from well-attended events to an increase in student enrollment and graduation rates.

And while the school itself is going through a transition period as it searches for a new president, Strong hoped Friday’s activities and the good news would carry over into the new school year, which began on Aug. 13. Crafton is seeing robust enrollments for fall semester, welcoming over 6,000 students to campus. With more classes scheduled to begin throughout the semester, the College expects enrollment to grow more than 3.5 percent over last fall.

Helping to make that a reality is Audre Levy, Crafton’s interim president, who will oversee the campus while the search for a permanent replacement continues.

Levy, who came out of retirement to lend the college a hand, shared some words of encouragement based on her own experiences as a long-time educator and the message behind “Who Lives, Who Dies, Who Tells Your Story,” a song featured in Lin-Manuel Miranda’s hit musical, “Hamilton.”

“Students remember the little details – like the time you helped them do something,” she said. “Simple acts can touch so many lives, and it’s wonderful to know that many of you will live on in the stories of the students you touched. They will tell your story.”

Opening the doors to student success served as the event’s overall message, and Johnstone’s multi-hour, interactive workshop continued to push the narrative through the use of online polling and conversation among educators.

Although the story of each student is different, he explained, about 98 percent of college students are “career focused.”

“And right now we know we are preparing our students for jobs that don’t exist,” he said, adding that should not stop an educator’s overall focus of the job at hand.

Although the definition of creating pathways can differ based on need, Johnstone encouraged Crafton officials and educators to not be afraid to think outside the box as change is inevitable and to not stray away from uncomfortable conversations about issues that could arise.

“We have to have (those) conversations, including about race,” he said, “because without it we won’t be able to find adequate solutions. We have to work together to solve these problems.”

Guided pathways is a focus of the California Community Colleges. For more information, access http://cccgp.cccco.edu.