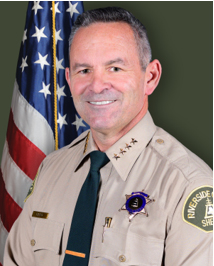 By Faraz Rizvi, an organizer in the Inland Empire and is the Special Projects Coordinator for the Center for Community Action and Environmental Justice

On December 19, 2020, at 12:27 PM, we called for Riverside County Sheriff Chad Bianco’s resignation following the murder of Ernie “Teddy” Serrano at the hands of his deputies at a Stater Brothers in Jurupa Valley, CA.

After trotting around the national circuit, visiting right-wing news networks, and using his influence to advocate for the continued neglect of Riverside County public health orders, Bianco responded to us with, “I waited to respond until I knew all the facts. Acute Methamphetamine intoxication resulting in a heart attack is not even close to murder. You should be ashamed of yourselves for a community action organization to misrepresent such a tragedy. I’ll wait for the retraction”.

However, the elected Sheriff’s actions to insulate their department from being held accountable to the community in the aftermath of the outrage following the murder of Ernie Serrano makes our demand more urgent than ever. We reaffirm our request for Sheriff Bianco’s resignation. His dereliction of duty and ongoing gross negligence of leadership has led to ongoing deaths and use of force lawsuits costing Riverside County taxpayers $9.7 million in 2018. In fact, the city of Jurupa Valley would be better served by ending its contract with the Riverside County Sheriff’s department and developing a locally controlled agency. An agency that protects residents while reflecting the community’s diversity. The city of Jurupa Valley, which already struggles to breathe clean air, should invest their tax dollars for adequate public safety, not choked and asphyxiated by Bianco’s deputies.

For months, community activists have repeatedly told the County of Riverside Board of Supervisors to consider how systemic racism leads to disproportionate impacts on Black Indigenous People of Color (BIPOC) communities. Still, it fell on deaf ears at board meetings and the community listening sessions, where these concerns were swept under the rug to be forgotten. We remember vividly, Chairman V. Manuel Perez, District 5, made a motion on May 25 for the county sheriff’s department to review its policies and report back to the board. It failed to get a second, and today, another family is in mourning due to this negligence. The same Sheriff refusing to hold a review of his department’s policy for accountability is claiming no wrong-doing before the end of an investigation on a death at the hands of his deputies.

Plainly, the systems that roll back water quality regulations for corporate interests, place warehouses in our communities, and dirty trucks next to our schools to pollute our children’s lungs – are the same systems that have allowed COVID-19 to kill BIPOC communities at a higher rate. As it stands, the Inland Empire is one of the hottest zones of the pandemic in California. From the top 50 districts with the highest rates of COVID-19 cases, “about half of them were in the Inland Empire, including Riverside,” showing the lethal consequences of Sheriff Bianco’s failure to enforce any guidelines.

It is this very system that takes the lives of Black and Brown people in broad daylight —whether it’s a carotid choke that killed George Floyd or a blue glove pressing against Serrano’s neck—it is this same system that tells our communities it has no regard for our lungs or our lives.

In the Inland Empire, breathing is a luxury considering the impacts of COVID-19 are exacerbated when combined with exposure to particulate matter 2.5 (PM2.5). Sheriff Bianco ignores the science and tells us not to listen to the advice of experts. He is now telling us that Ernie died due to his lungs’ size leading to a heart attack, but he did not mention the moments of the body-worn camera that shows Ernie’s chest being pressed aggressively against the cashier stand. Bianco purposely omits the deputies’ inaction as Ernie begs, through pain and fear, to be let go as they continue to smash his lungs onto the counter with little regard for his comfort.

Racism is not only centered on acts of aggression or direct violence, but it is codified in policy and the systems that manifest slow and silent harm to marginalized communities. The same communities grieving Ernie Serrano do not get breaks; instead, their suffrage is commodified and underlined with industry’s egregiousness. As deputies’ batons are beating them, they’re also being robbed by greedy corporations.

When someone shows you who they are, believe them. Sheriff Bianco has shown himself to care more for political theatrics than the lives of the same communities he is elected to serve. Like anyone else, a sheriff has to be held accountable for the criminal neglect of black and brown lives that constitutes the dismal state of affairs here in the Inland Region. The systemic racism that insulates the few’s actions from the demands of the many must end. As residents of the Inland Empire, we demand the resignation of Sheriff Bianco.

Kneeling with protestors during Black Lives Matter protests in downtown Riverside was a good photo opportunity, but justifying the brutal beating of Ernie Serrano is, in Sheriff Bianco’s own words, typical “do as I say, not as I do” behavior. We need to eradicate racism in the environment and the justice system.