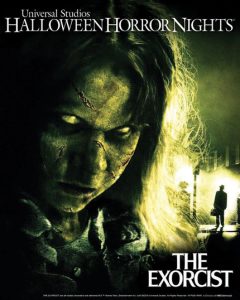 Halloween Horror Nights at Universal Studios opens Friday and the masterminds behind one of the most terrifying, intense Halloween events have a lineup this year that’s bound to have you crying fear tears.

From classic horror films to television shows, the freakout-fest of maze headliners for the 2016 installment of Halloween Horror Nights include:

The Exorcist, American Horror Story, Friday the 13th, Nightmare on Elm Street, Halloween, Texas Chainsaw Massacre, the Walking Dead, the Purge, and let’s not forget the infamous “Terror Tram,” which is taken over this year by horror film director Eli Roth.

With that said, grab an extra change of pants and prepare for the freakout-fest details before you head out:

As guests exit the tram and roam sets such as the Bates Motel from “Psycho” and the plane wreckage from “War of the Worlds,” they’ll have to watch their back as they become surrounded by hundreds of clowns and escape becoming Harry’s next victim.

The Exorcist, will take possession as guests will see, hear, feel – and even smell – every iconic levitating, head-spinning, vomit-wrenching, skin-crawling moment from the film. The maze will recreate some of the film’s most haunting scenes, ushering guests into its unparalleled terror as if their very souls were possessed by the devil.

American Horror Story fans can relive some of the terrors of the show when they go through the brand-new attraction that includes threats from Murder House, Freak Show, and Hotel.

Twisted scenes from Murder House will unleash the evil spirits that possess the Harmon estate, spiraling guests through decades of the tortured dead who previously resided there. In Freak Show, guests will join a troupe of biological misfits in a sinister sideshow where they’ll be stalked by the murderous and deformed Twisty the Clown. Finally, guests will succumb to the warped desires of The Countess after checking in to the haunted Hotel Cortez, conceived from the beginning as a torture chamber for its customers.

“The Texas Chainsaw Massacre: Blood Brothers” maze will pit guests against the unsavory wrath of demented killer Leatherface and his mentally unhinged brother ChopTop. With the perverse duo at the helm of a grotesque BBQ restaurant staged inside a dilapidated roadside gas station, unwitting guests will soon come to realize the new terror that awaits as the blood brothers continue their hedonistic prey on human flesh.

“Halloween: Hell Comes to Haddonfield,” is inspired by the second film in the classic “Halloween” horror franchise. Echoing the infamous words uttered by the film’s Dr. Sam Loomis, “You can’t kill the Boogeyman,” the twisted maze will shed new light on the terrifying lunacy of Michael Myers as he scours the streets of Haddonfield and stalks the halls of Haddonfield Memorial Hospital in ruthless pursuit of victims.

“Freddy vs. Jason,” The new experiential maze will thrust guests into an epic battle between Freddy and Jason and a showdown in which the fate of only one mass killer will survive. Tickets for Horror Nights are on sale now and offered this year is a newly introduced ‘After 2 p.m. Day/Night Combo’ ticket inviting guests to experience the theme park’s most exciting attractions by day and remain for the terror that awaits at night.

Tickets purchase can be made at www.HalloweenHorrorNights.com/Hollywood.

Leaders yet again rush to trade lives for dollars

Emerging partnerships are key to the IE’s promising future