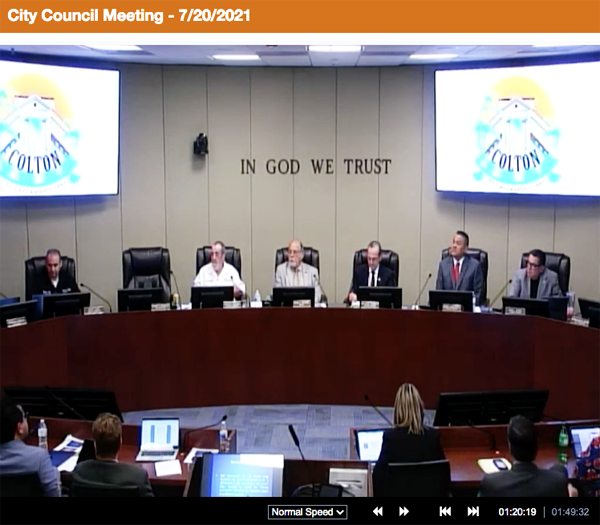 During the regular Colton City Council meeting on Tuesday, July 20, the issue of illegal fireworks was discussed after Councilman David Toro presented a sound clip of the ruckus he experienced on the 4th of July at the previous meeting. Toro suggested banning Safe and Sane fireworks may act as a deterrent to illegal ones.

“Coming through La Loma Hills, going through Grand Terrace, the Reche Canyon area where it is illegal to have Safe and Sane it seemed to have deterred, in my mind, others from using illegal fireworks,” Toro said, acknowledging that other cities may not have seen a similar decrease in illegal fireworks.

Toro noted the considerable impact it would have on the nonprofit and youth organizations that rely on the sales of Safe and Sane fireworks.

“We need to look at both sides of the scale, on one side you have the nonprofits or leagues, Colton is a very sports-oriented city… it’s very important for us to have that for them, but at the same time we need to look at the little boy who died, the houses that caught fire, the guy who blew his hand off, the people who sit in their homes with their chests tightening because they can’t escape the sound, we need to look at helping those people have some sort of relief from the illegal fireworks, and how we help the youth organizations,” Toro remarked.

Councilman Kenneth Koperski noted that Safe and Sane fireworks are illegal in Yucaipa, yet the city experienced triple the number of illegal fireworks than Colton and pointed out that the people who suffered injuries or the houses that burned down were a direct result of illegal fireworks.

Councilman Isaac Suchil echoed Koperski’s sentiment, adding that illegal fireworks is the fundamental issue, not Safe and Sane, and suggested reaching out to local Assemblymember and Congressman to bring about legislation to help stem the influx of illegal fireworks into the state.

Colton Fire Chief Tim McHargue agreed, “This is bigger than the city of Colton, we have to stop the flow of fireworks into the state of California. We are looking to long-term strategies to defer illegal fireworks. We are working on this, it’s not like we’re just throwing our hands up in the air and we’re victims to these things, we’re going to keep doing these patrols, keep writing citations, hope that the word gets out there, and hope that we can make an impact.”

Mayor Frank Navarro also agreed that the city should begin talks with elected officials in Sacramento and expressed his concerns over banning Safe and Sane fireworks.

“When our families can’t afford to pay for three or four kids, the league will step in and pay so that they all have the opportunity to play sports. Sports builds character, builds sportsmanship, they build confidence, and they also set up a level of integrity at their age,” Mayor Navarro said. “As much as I admire Councilman Toro’s comments regarding the illegal fireworks and the Safe and Sane, if we were to take that opportunity away from our nonprofits and our leagues, I think that we would be hurting our youth more than we would be gaining an advantage over the illegal fireworks.”

Council voted to leave things as they are and continue to develop strategies to mitigate the use of illegal fireworks in the city.

The 2021-2022 college football playoff is already historic, and it’s only going to get better

Southern California will continue to see an uneven recovery through 2022