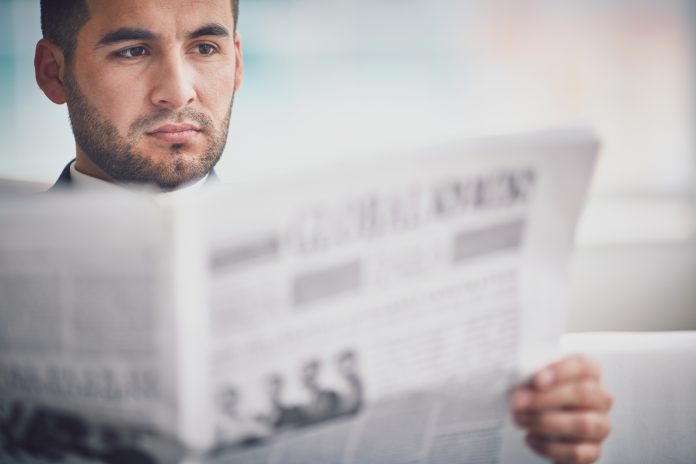 By Dr. Thomas F. Corrigan (or T.C.), Associate Professor in CSUSB’s Department of Communication Studies and Coordinator for CSUSB’s Master of Arts in Communication Studies T.C. studies the political economy of the media, and he teaches courses on media institutions and digital media & society.

A ghostly specter haunts California’s Inland Empire. Several do, in fact. They appear at our doorsteps and in our news feeds as pillars of the community — our local newspapers. But while they may look and feel like the “local rag,” a closer examination reveals them as apparitions. And that should send a shiver up the spine of anyone who cares about local civic life.

Now, this isn’t a screed about some “fake news” boogeyman. In fact, most local editors and journalists do a commendable job with the limited resources available to them. Rather, the problem is that IE newspapers — particularly the local dailies — don’t produce all that much local news. They are what UNC’s Dr. Penny Abernathy calls “ghost newspapers” — publications that “have been so significantly diminished that their newsrooms are either nonexistent or lack the resources to adequately cover their communities.”

It’s no mystery why. First, Craigslist came for the classified ads. Then, Facebook and Google captured nearly all the remaining ad revenue — and while using publishers’ content as bait! Between 2000 and 2020, newspaper industry ad revenues plummeted from an inflation-adjusted high of $73 billion to just $8.8 billion. Meanwhile, circulation revenues, including from digital subscriptions, have been flat for a decade.

The result? Since 2004, more than 2,100 newspapers have shuttered nationwide, and half of all local journalists have lost their jobs. Yes, some digital start-ups and non-profits do excellent work, but they haven’t anywhere near the funding needed to replenish America’s local reporting corps. In fact, a 2019 study of 100 American communities found that newspapers — ghostly as they may be — still produce more local stories than TV, radio, and digital news sites combined.

In the IE, profiteering newspaper owners are also to blame. The San Bernardino Sun, Riverside Press-Enterprise, Inland Valley Daily Bulletin, Redlands Facts are all owned by Southern California News Group (SCNG), as are several other regional dailies and weeklies. And SCNG is owned by Digital First Media and the notorious Alden Global Capital. Alden is a “vulture” hedge fund that has snapped up scores of American newspapers, cut editorial staff, and squeezed the industry of its remaining revenues.

In 2018, Alden initiated several major rounds of layoffs at SCNG. In April of that year, SCNG executive editor Frank Pine said their newsrooms “had been cut nearly in half” under Alden. And in 2020, the company blamed another round of furloughs and layoffs on pandemic-induced ad revenue declines.

What are the implications for local news media and the communities they serve? As SCNG’s Pine explained, “With fewer reporters, we provide less local reporting … Communities that used to get three or four stories a week may now only get one.”

Indeed, visit the Sun, Press-Enterprise, Daily Bulletin, or Redlands Facts websites, and you find many of the exact same regional stories published on each site. But you really have to hunt for genuinely local coverage of that paper’s ostensible community. And various studies find that as local newspapers contract, public knowledge and voter participation fall, and government costs and secrecy rise. In short, the crisis in journalism is a crisis in American democracy and civic life.

SCNG editorial staff haven’t rolled over in the face of Alden’s abuses. In 2018, SCNG’s Pine suggested in an editorial that a shift to non-profit ownership might be necessary. And this June, SCNG employees unionized — part of a larger, national trend in newsrooms. This may well help them negotiate for better pay, working conditions, editorial independence, and job security. And non-profit status would allow local papers to put more of their revenues into local news. However, neither fix newspapers’ underlying revenue problem, and after 20 years of trying, it’s unclear the industry ever will.

For a while, it seemed Washington was content to watch local journalism wither on the vine. But following massive newsroom layoffs during the pandemic, Congress is finally considering whether to intervene to save local journalism.

Among the many recent proposals, the Local Journalism Sustainability Act (LJSC) has garnered the most attention and bipartisan support. The bill includes three main provisions: a $250 tax credit to subscribe or donate to local news organizations; a $5,000 tax credit for small businesses to advertise in local publications; and a payroll tax credit to cover up to half of some newsworkers’ salaries.

These subsidies aren’t just for daily newspapers, either. They would also provide much-needed support for other local news media, including digital sites like Inland Empire Community News, minority-serving outlets like Riverside’s The I.E. VOICE and First Nations Experience, non-profits like the Claremont Courier, public media like KVCR, and local weeklies like the Yucaipa/Calimesa News Mirror.

As of November 12, the bill had 63 co-sponsors — 49 Democrats and 14 Republicans. However, it does not have any co-sponsors from the Inland Empire. This is unfortunate given the state of local news. So, area House reps should co-sponsor the bill and work to pass it. They could do so as either a stand-alone bill or as part of the $1.75 trillion budget reconciliation bill, which currently includes the payroll tax credit.

As Report for America’s Steven Waldman said, “The payroll tax credit … would be the most significant help for local news in decades if not centuries — and it is targeted at the exact right place: encouraging the hiring or retention of local reporters”

Now, the bill isn’t perfect, and details are still being ironed out. Some question whether it would adequately support minority media. There’s the sticky matter of how define “local news” and screen out political opportunists. And the idea that tax dollars could enrich bad actors like Alden Global Capital absolutely turns my stomach. These are issues that can and should be addressed. On the Alden question, for instance, I suggest lawmakers require outlets to make any stories funded by taxpayer dollars freely available on the Web. After all, we will have already paid for them.

Some argue that journalism subsidies are incompatible with a free press or that they are socialist — even tyrannous. This ignores that many other democratic countries invest large sums in public media and journalism while still ensuring editorial freedom and independence. Even the U.S. has a long, if hidden history of subsidizing newspapers through content-neutral postal and printing subsidies.

Others will argue that we can’t afford the payroll tax credit’s 10-year, $1.67 billion price tag. But you can’t have a free press if you don’t have news outlets in the first place. And the societal cost of not acting are staggering — particularly as things like school board and zoning commission meetings go uncovered.

I, for one, would love to see legislators invest even more in local news — particularly public media, non-profits, and minority-serving outlets. Heck, even SCNG editorial staff recognize that a shift to non-profit status may be superior. For now, though, Inland-area House reps should preserve and expand existing local reporting by co-sponsoring and passing the Local Journalism Sustainability Act. Otherwise, it will come back to haunt us.