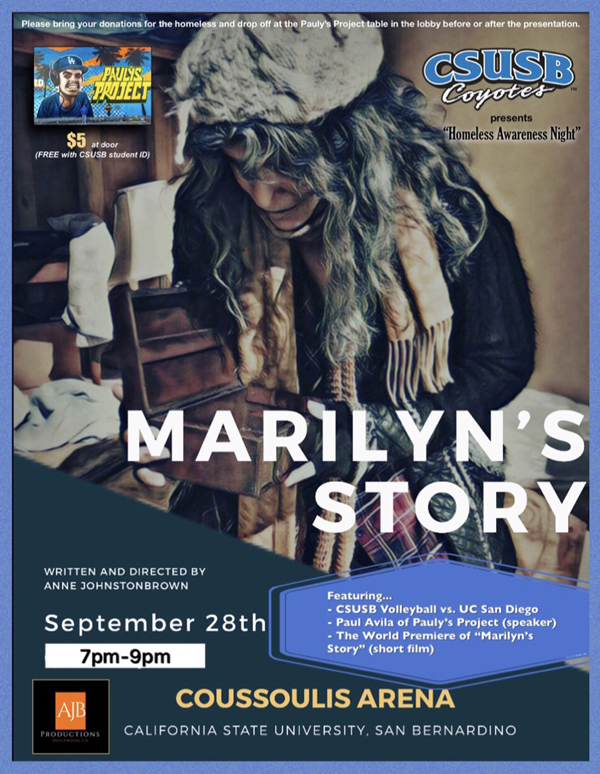 The cast and crew of the new short film,”Marilyn’s Story,” has teamed up with Pauly’s Project and the Cal State San Bernardino Athletic Department for a one-night-only “Homeless Awareness Night” on Saturday, September 28th at 7pm-9pm.

We will be previewing the movie, as well as raising awareness for the growing homelessness problem in the Inland Empire. Come early if you want to hear some songs from the staged production of LYMAN The Musical, and you don’t want to miss Paul Avila of Pauly’s Project, who will be discussing his ministry to the homeless of Skid Row and how we can make a difference in our own city.

The doors open before 7 p.m.. There will be a volleyball tournament (CSUSB vs. UC San Diego), during which time the cast of “Marilyn’s Story” and Paul Avila will have several opportunities to speak to the crowd. If you have donations to bring for the homeless, Pauly’s Project will be accepting them in the lobby. Look for their booth and representatives.

This is a very exciting event, one which we hope will change the lives of not only the homeless souls of the Inland Empire but of all those who attend. Come be one of the FIRST to see our celebrated film about how one woman went from middle class to homeless. Every homeless person has a story…this is one of them.