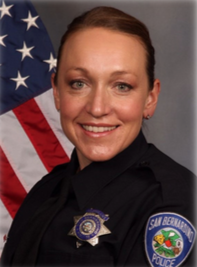 Lt. Jennifer Kohrell grew up in the Inland Empire and spent much of her young life in the northeastern part of the City. She was fascinated by her DARE officer in school who thought she would make a great police officer one day. She completed her formal education locally. At 19, she did her first Ride-A-Long with the Department and immediately knew this was the place for her.

In 2003 after completing college in San Bernardino, she began her career with the San Bernardino Police Department. Jennifer quickly maturated through the department. Her assignments have included Patrol Officer, CITE team member, Problem-Oriented Policing, Field Training Officer, District Resource Officer, Narcotics/Vice Officer and was cross-sworn with the FBI Human Trafficking Task Force. She was named, “Officer of the Year” in 2011.

In 2012, Jennifer was promoted to the rank of Detective and assigned to the Specialized Enforcement Bureau until she was transferred to the Personnel and Training Division, where she completed background investigations and updated the Field Training Officer guide. She was promoted to Detective for Professional Standards. She is a graduate of the National Emergency Management Advanced Academy and possesses her Terrorism and Homeland Security Specialist Certificate through the California Officer of Emergency Services.

In 2016, Jennifer was promoted to the rank of Sergeant, and her assignments included Patrol Supervisor, Emergency Manager, Community Emergency Response Team (CERT) Manager, Special Events Coordinator, Terrorism Liaison, and Task Force Program Supervisor. She met the qualifications and was granted a coveted “Secret Clearance” by the FBI.

With great pride, we congratulate our most senior homegrown female lieutenant, Jennifer Kohrell. She and her family continue to live locally. She loves her city, San Bernardino. We are indebted to her for her years of service to this city.