The ordinance, which is expected to go into effect by November, also prohibits smoking in recreational areas and city buildings, and includes a smoking ban on e-cigarettes at parks and at other city-owned properties.

The Rialto Community Coalition, which championed for the smoke-free policy in the city, spoke to council before the vote. Coalition members provided survey results conducted from March 1 through Aug. 6 on more than 200 residents favoring a smoke-free Rialto. Survey results showed 96 percent of residents in agreeance that smoking at parks should be banned.

Helping present their case, was a visual of about 3,000 cigarette butts placed in three large jars. The butts were collected by coalition members in about an hour’s time from Rialto, Fergusson and Birdsall parks, Goldman said.

“This is extremely gross and a health concern and health factor,” Mayor Deborah Robertson said, as she looked at the jars placed on the council desk.

Coalition member and mother of three, Jacqueline Urbieta, was among those who participated in the collection project at the parks. The number of cigarette butts collected was “alarming,” she said, and a major concern lies in children picking up the cigarette remnants at playgrounds.

Aware of the potential harm, Robertson said that the smoking ordinance should go further and include a ban on chewing tobacco.

City staff will be working on an additional ordinance to include Robertson’s request. 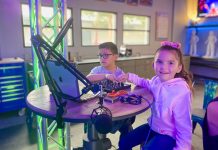