Rialto police Ofc. Dwuan Rice was only 17-years-old when he heard the news of a hijacked plane hitting the south tower of the World Trade Center in New York Sept. 11, 2001.

“As I walked onto (my school) campus I saw a bunch of students, faculty and staff in disarray. At that moment we didn’t know what was going on… I remember thinking to myself, there’s so much hatred in the world who would do something like this. I was confused, I was angered, I was saddened by what I was seeing, and I was very distraught,” he said.

“In the days to follow, I watched millions of Americans come together in support of each other… complete strangers both civil servants and civilians come together for one goal. It was at that moment that I realized that no matter what, love will always overshadow hatred.”

Rice was among several speakers who shared words during a remembrance ceremony held in Rialto to mark 15 years since 9/11.

The sound of a bell rung four times during the ceremony observed the tragic and unforgettable events: At 8:46 a.m. the north tower of the World Trade Center in New York City was struck by a hijacked airliner. Seventeen minutes later, the south tower was struck at 9:03 a.m.. At 9:37 a.m. a plane was flown into the Pentagon. And as the south tower was collapsing, hijacked Flight 93 crashed into the pennsylvania countryside at 10:03 a.m.

“I hadn’t yet decided that I was going to be a police officer,” he said, as he addressed an intimate crowd at the ceremony. “… So I stand here in front of you, honored and priveledged to be a police officer, to even be mentioned in the same breath as those men and women who made the ultimate sacrifice on 9/11.”

The ceremony, held between the Rialto Police Department and the Rialto Fire Department Station Headquarters along Willow Avenue, brought together residents, city leaders and fire department and law enforcement members to honor the 343 firefighters, 60 police officers and thousands of citizens that lost their lives during the attacks.

As speakers shared words, many in the crowd looked over to the hundreds of wooden crosses placed on the lawns of both stations. Blue ribbons tied around 60 of them honored law enforcement who died in the attack, while red ribbons recognized the firefighters who were lost.

Rice asked that before leaving the ceremony, guests take a moment to remember not only law enforcement and fire officials, but also the many children and families still affected 15 years later.

The remembrance ceremony is held annually in Rialto and is hosted by the police and fire department in partnership with the city. 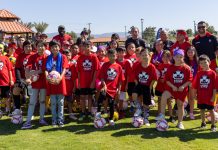 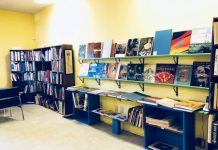