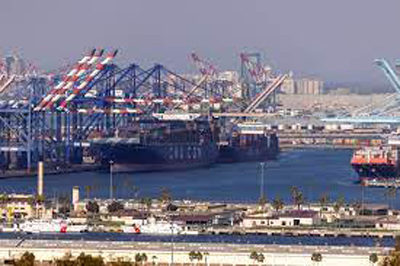 By Jessie Parks, a student of Environmental Policy in Riverside and a Sierra Club Advocate intern with the My Generation Campaign.

Last fall, a veil of smog blanketed Southern California. For many families in Los Angeles, Long Beach, and Riverside County, it was a case of “don’t look up” and don’t go outside. We prepared to celebrate yet another holiday season worrying about the impacts of our region’s increasingly toxic air on our health. As others across the country impatiently awaited cargo on board ships caught in Southern California’s congested ports, our communities impatiently waited for that backlog to clear in the hopes that that would help clear the air.

New data from the California Air Resources Board shows that increased port congestion has resulted in a dramatic increase in smog and particulate matter pollution in the South Coast Air Basin—roughly equivalent to the total emissions from 5.8 million passenger cars. And while the shipping backlog may be a new phenomenon, the impact of pollution from California’s ports is long-established, and policymakers have had more than enough time to respond.

Almost a decade ago, the South Coast Air Quality Management District (SCAQMD) promised it would adopt a rule to ensure the ports would clean up the deadly pollution from their operations. Yet year after year, those efforts have stalled, with the AQMD instead choosing to pursue voluntary agreements with the Ports. Last August, the Board set a six-month deadline on negotiations. If a voluntary agreement could not be reached with both the Los Angeles and Long Beach ports, staff would begin formulating an Indirect Source Rule to mitigate the pollution stemming from port operations.

That time is up, and the SCAQMD is long overdue to act to protect our air quality.

If there was already a need for these rules a decade ago, imagine how much more critical they are now, with the dramatic rise in shipping cargo at the ports matched only by the rapid proliferation of warehouses throughout Riverside County—with the commensurate spike in growth of polluting vehicles moving the cargo inland and back out again. This is why the Indirect Source Rule is so important, it’s a unique opportunity to respond holistically to the pollution that stems from the ports’ day-to-day operations–laying the groundwork to introduce zero-emission technologies across the supply chain. This rule recognizes that activity at the ports produces pollution that impacts all of us living in the South Coast Air Basin.

Reducing this pollution will make a measurable difference for young people in Riverside County; people like me. In my neighborhood, schools, daycares, and homes owned by people of color are now inundated with the fumes and pollution that are sadly synonymous with the movement of goods—pollution that begins and ends at the ports. The simple act of ordering goods online is a convenience for most, but for us, it’s created a constant battle for our lungs and our health.

I, personally, cannot wait any longer for solutions. As I enter my 20s, I am increasingly nervous about what kind of world I will be left to manage. Each morning I feel the excruciating pain of breathing smog-infused air. I go to sleep each night wishing for even the slightest amount of rain to help cleanse the air and dissipate the pollution.

Communities like mine are relying on the SCAQMD board members to stand up to the cargo and freight industry executives who have successfully stalled action for years, by developing a rule that will force them to clean up their act.

With zero-emission electric technologies, we can clean up not only the ports, but also the trucks, rail lines and other heavy equipment that barrel in and out of our communities every day. From Riverside to the Palm Desert, Los Angeles to Long Beach and beyond, young people deserve this rule. We look forward to the SCAQMD making good on their promise to protect us, and our future.

*Views expressed do not necessarily reflect those of IECN.