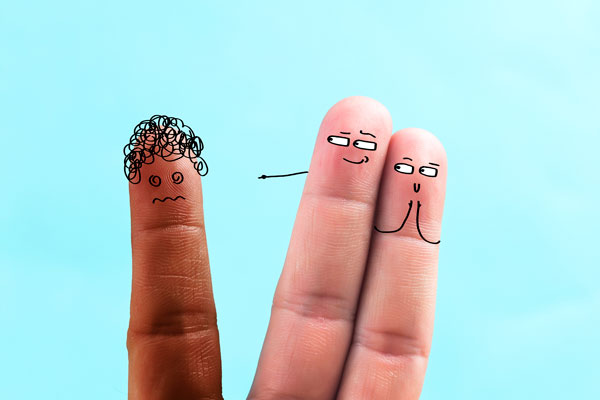 Racism is running rampant. History has recorded evidence that racism has been evident in every culture. A prevalent question is: “What exactly is racism?”

Basically, it is an attitude that breeds a bigoted behavior. It is determined by those with a color other than yours; a stature that is different; skills that are different; another’s religious views that are different; a different language; body structure; opinions of others; a person or group’s success or failures; haves versus have-nots. These are just a few.

A basic element in racism is PREJUDICE. This attitude is usually followed by: jealousy, anger, hatred, bitterness, indifference, intolerance; and more often than not, a physical response.

Since the most flagrant expression of racism is white versus blacks, I will focus on it.

Strange as it may seem, racial prejudice is often stimulated by a sense of inferiority. If we accept the principle that all humans are created equal, then racism is stimulated by the black’s compensation in some way. Intelligence, athletic abilities, physical appearance, sexual prowess, imagined superiority. The latter element is often the most dominant cause.

Churches? Absolutely. It is common knowledge that the most segregated hour of the week, is the 11:00 AM hour on Sunday. In the 1950’s the most publicized photo was of a group of men, with arms locked in front of the front doors of a large Methodist Church in Montgomery, Alabama. They were guarding the entrance against black attendees.

History has recorded that in every example of racial slavery, rather literally or figuratively, the victims compensated by responding in unique ways. Blacks have done this by outstanding musical performers, football, basketball, track and field, movies.

As a retired minister, I was pastoring in Florida in the 1950’s. I saw racism at its worst. Martin Luther King, Jr. was in his heyday. The KKK was strong; they wore their gowns on Saturday nights, and sat in the church pews on Sunday.

Segregated black schools were a disgrace. Jobs were menial and poorly paid. The church built a huge educational building for a parochial school. The stated purpose? To provide a school where white children could attend without black children.

I’ll never forget another incident. A very active family, husband and wife, had eight children. Seven boys and one girl. Mom and Dad had been members way before I became pastor. There were many blacks and Puerto Ricans in the community.

Shortly thereafter I resigned and accepted a church in California. Guess what? Racism was prevalent in California. Racism is everywhere, from the President to churches.

The issue is beyond my comprehension. The two main documents in my life, the Bible and the U.S. Constitution, both voice strong objection to racism. The Constitution speaks of “equality” for all. The Bible speaks of “one blood” and all being children of God.

Unfortunately, religions have often been racist prone. Take the slave trade in the New World. Most of them were victims of Islam and the ships that brought the slaves were owned by Christians and Christians bought the slaves.

Both Jesus and Muhammad the Prophet opposed slavery.

A final personal word. I’ve often wondered why my view about racism is the way it is. I have several explanations. One (1) is the way I was raised. In my early years we lived with blacks to our left and Italians to our right. I was a friend with both families. I played with the kids from both families. A couple of things I remember vividly. Food was shared. I learned to love “soul food” from the family to our left. I learned to love spaghetti and wine from the family to our right. I learned very quickly that if the black momma whipped her kids, I got it too. The same applied to the Italian momma. I was family.

Two (2) I was friends in High School with all races, including blacks. In the band, in sports, in dancing and in churches we attended. Three (3) my earliest jobs. I worked with several blacks. We got the same pay and complained about the same issues.

Four (4) I early on in my studies I became aware of the injustice and unfairness that many faced. Against blacks, foreigners and me. How? Because my family and I were POOR. Very poor. I wore patched clothes. The Great Depression was on. Food was scarce. We scrounged around for the necessities. We all had a lot in common.

Then came my life’s work. A minister and my aforementioned expressions.

One final thought. The ancestors of every person on earth came from Africa. They were all black. Blacks, Hispanic, Jewish, Arab, Native American, Scandinavian, Oriental or any other race; WE ARE ALL BROTHERS AND SISTERS, TOGETHER.
Amen. Selah. So be it.