Three San Bernardino City Unified School District (SBCUSD) employees and a middle school student whose heroic actions saved the lives of six people will be recognized by the Board of Education during their meeting on September 20.

District Police Officer Eric Campa was on his way to Arroyo Valley High School last May when he spotted an abandoned burning home. After calling the San Bernardino Fire Department, Campa ran into the burning home and inside a nearby shed, where he found a homeless couple sleeping.

After helping them to safety, Campa urged nearby residents to evacuate. With the home completely engulfed in flames, the fire quickly spread to power lines. Once again, Campa went into action, pushing a man out of the way just as live power lines came down where the man had been standing, according to a district press statement.
“I don’t really see myself as a hero,” said Campa, who has worked for the District for more than three years. “I did what any other police officer would do. It’s all part of my job.  But I do feel that I was at the right place at the right time.”

“I was a little scared, but the training kicked in,” Romero said. “I knew what I needed to do and I stayed calm.”

Two week’s later Romero’s colleague Vanessa Paez helped a young boy; she spotted him with both hands around his neck. Paez also used the Heimlich maneuver to stop the fourth-grader from choking.

“The CPR training was crucial to helping that little boy,” Paez said.

Curtis Middle School eighth-grader Janeth Santos used her CPR certification to save the life of a toddler choking on a piece of candy. Janeth ran out of her apartment when she encountered a mother carrying a toddler whose airway was obstructed and used her fingers to dislodge a candy from his throat.

According to the district release, Janeth had just earned her CPR certification as part of Curtis Middle School’s medical pathway that allows students to explore healthcare careers through hands-on activities.

The meeting is scheduled for Tuesday, September 20 at 5:30 p.m. at the Community Room, 777 North F Street in San Bernardino. 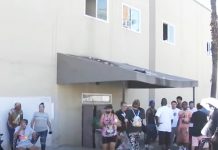