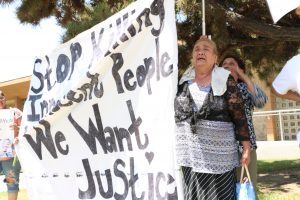 On August 2nd protestors surrounded the Rialto Police Department headquarters armed with signs and megaphones. The protestors were friends and family of Erick Aguirre, who was shot and killed by Rialto Police after a routine traffic enforcement stop went awry.

At approximately 11:50 p.m. on July 13 Rialto Police attempted a traffic stop for a vehicle code violation in the south end of the city. Erick Aguirre, along with a female passenger, failed to stop and led police on a 10-minute pursuit ending in Bloomington.

According to the police report, Aguirre failed to comply with the officer’s directions, Rialto officers reported seeing Aguirre armed with a shotgun resulting in a shooting incident. Aguirre was pronounced dead at the scene while the passenger was taken to a local hospital after being bitten by the officer’s K9.

“He did not comply with officer’s orders and he was armed. Our officers felt their lives were in jeopardy and they had to protect themselves,” said Sergeant Cameron Nelson of the Rialto Police Department.

However, Samantha Goode, a friend of Erick Aguirre and the female passenger, told his family that she doesn’t remember Aguirre ever moving his hands from the steering wheel.

50 participants attended the protest, many were there to support the grieving family of Erick Aguirre in their attempt to find answers about the events following up to that fateful night.

“I’ve had no response from the Rialto Police Department, I’m trying to figure out what is going on and why I’m in this situation,” said Odila Penaloza, Erick Aguirre’s mother. “I don’t care about money, all I want is the truth. Why did they kill him? What was their reason? I want to know.”

Catalina Guerrero, Erick Aguirre’s grandmother, was the one who initially thought of holding a protest in the wake of mourning her grandson. This prompted the family to contact Centre CSO, a community service organization, and human rights activist Carlos Montes who helped organize the protest with the family.

“Our goal with this protest is to get answers and have the police who shot my son either fired or arrested, there were other ways this could have gone,” said Penaloza.

Erick Aguirre was 25 years old, a resident of Bloomington and attended local schools in his community. Nick Roman, Erick Aguirre’s brother, describes his brother as someone who cared deeply for his family and community. Roman and his brother shared a strong bond since they were both afflicted by the cancer that took Aguirre’s right foot.

The incident is still under investigation by the San Bernardino County Sheriff’s Department, at the time of the incident Rialto officers were wearing bodycams but it is unclear if the footage will be released to the public. The Rialto Police Department understands the family’s frustration and grief while supporting their use of their First Amendment rights for their stance on this tragic situation.