Hundreds of runners stood at the starting line bright and early…dressed in an array of athletic gear for the mud run that was hosted by San Bernardino County Sheriff’s Athletic Federation (S.A.F.). 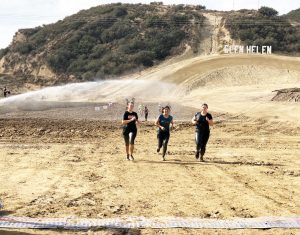 “This is my first mud run and I’m an avid supporter of our veterans. When I heard that this year’s run would benefit Warfighter Made it was an even greater incentive to participate,” said mud run participant Cristian Cervantes.

The timed competition began with the fly-in of a helicopter and San Bernardino Reserve Officer Training Corps Honor Guard commencing the event.

“Aside from the charitable impact, I was a bit anxious to see what the course would look like. Ultimately…it was even more extreme than I could have imagined,” continued Cervantes.

Cervantes shared that steep mountains and army crawling through viscous mud were only two of the difficult points during the 5K run.

“Events like these are great for the community. It brings all of us together as one, for a good cause. It’s always awesome to see strangers helping pull one another up and lending a hand through obstacles,” said participant Ashley Millay.

Back in 2017, over $2,000 was raised for the Susan G. Komen Foundation; proving a successful track-record for the event.

The mud run ended with a recognition ceremony where top participants with the fastest recorded times were awarded. Those included Jose Ortiz of Moreno Valley, Austin Politelli of Murrieta and Darren Means of Spring Valley; all three participants finished in under 40 minutes.

“The S.A.F. would like to thank our sponsors, participants, volunteers and everyone who helped make this year’s mud run such a huge success,” said San Bernardino Sheriff’s Athletic Federation Race Director Sergeant Danny Rosa.