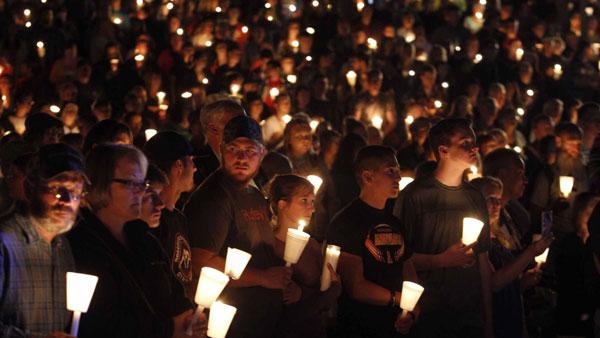 This article is one that I never expected to write. It’s about guns, and what I know about them could fit into a thimble. A small one. The closest I ever came to one was a B-B-gun – when I was a kid, 80 years ago.

The closest I ever came to hunting was looking for my lost dog or my neighbor’s dog. I love to eat fish, but never liked fishing. In fact, I can’t put bait on a hook. Therefore again, my motive for writing about something I know little about, is based on what I read and see on television. Here’s my story.

I am appalled by the fact that the United States – my country – has more mass shootings than any other country in the world.

Now get this. A mass shooting is defined as a shooting resulting in at least three victims excluding the shooter. When four or more are killed, the data shows over 300 mass shootings per year. When there are eight dead including the shooters, he either commits suicide, or is killed, or is restrained by law enforcement or civilians.

There are over 300 million guns in the hands of U.S. citizens-both legal and illegal. The number almost equates with the number of citizens. The percentage is higher than any other country in our world. That includes Russia and China.

Why isn’t there more done to gain control of guns? The answer is clear. Three letters plus two letters. NRA and D.C. They stand for the “National Rifle Association” and the District of Columbia for Congress and the President.

The NRA is a lobbyist firm that pretty much controls Congress and the President. What it wants, it gets.

In other words, the members of Congress – whether Republicans or Democrats – are given money that helps their election, by the NRA. The President has received the most money. Three-fourths of the House and Senate receives money from the NRA.

Statistics indicate that one of the Senators received approximately $3 million.  The Chairman of the Senate has received the most money this year. The President has reportedly said that he will see that the NRA gets what it wants.

After the seventeen students were killed in Miami, Florida there has been several suggestions mentioned by the President and various Congressmen. If they follow in the direction which has followed previous ideas, none of them will become laws.

The suggestions were: 1. To ban the Bump Stocks that turn a normal gun into a Machine Gun, 2. To let qualified teachers carry guns in their classrooms, 3. To lock up all schools instead of “open” schools; 4. To place several policemen in schools; 5. To raise the age when a young person can buy a gun; And 6. To get a background check on every person with mental health problems or has been an abuser of women or men, before he or she can buy a gun.

By the way, studies show that over 50% of abusers follow up killing the abused.

I’ve heard a great deal on TV and in publications about the 2nd Amendment.  So, I looked it up. It is the Second Amendment to the United States Constitution. It has only 27 words.

“A well-regulated Militia being necessary to the security of a free State, the right of the people to keep and bear Arms, shall not be infringed.”

To me, the key words are Militia, necessary, security, free, right, keep, bear, Arms, infringed. MILITIA refers to local units made up of male citizens of military age. He must be capable of bearing a gun to defend his home, family and community.

NECESSARY suggests their guns are to be kept in their homes and consisted of a musket, a bayonet and ammunition.

The major concern of our country today is that the situations are drastically different from that depicted in the Second Amendment. Times are certainly different today.

Muskets were single shot while bump stocks fire scores of bullets with one pull of the trigger. The population today is hundreds of times larger, the times are extremely more stressful, affecting the dispositions of all of us.

The mental health of many of our citizens, is contributing to the unstable mental cases. Not the least are the thousands of military veterans that are at loose ends.

Bullying, abusing, unemployment, increased marital problems and especially the immense presence of depression, all contribute to violence which too often ends with homicides.

A belated study of the perpetrators in the recent massacres reveals that over 50% were mentally disturbed.