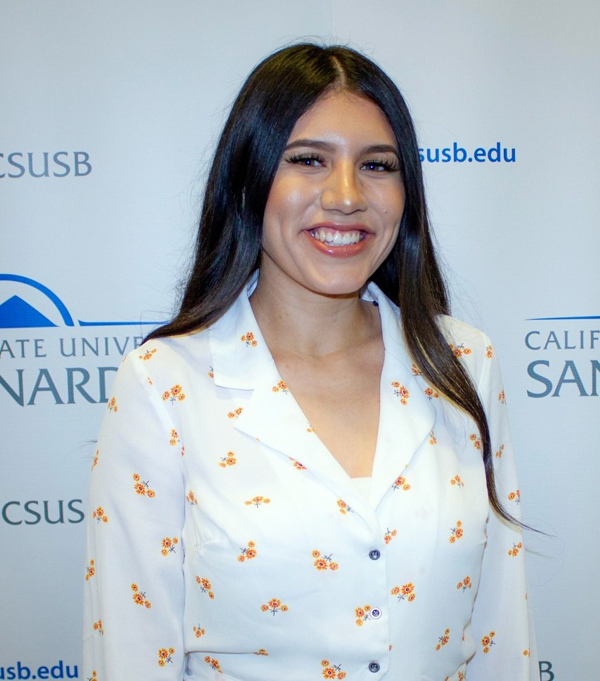 Cal State San Bernardino student Nora Nickoel Ortega has faced quite a few challenges in her personal life, but instead of letting them hinder her, she faces them head-on.

“Many people choose to use their challenges as an excuse to give up, but I have learned to use my challenges as fuel for overcoming them,” said Ortega, a graduate student earning her master’s degree in counseling and guidance with a Pupil Personnel Services credential.

And with that unwavering determination, Ortega, who lives in San Bernardino, has been named the Sycuan Band of the Kumeyaay Nation Scholar for the California State University Trustees’ Award for Outstanding Achievement for 2020-21, the CSU’s highest recognition of success. Only one student from each of the CSU system’s 23 campuses is selected for this honor, which is based on superior academic performance, exemplary community service and significant personal accomplishments.

A first-generation Latina, daughter of immigrant parents, and the youngest of 10 children, Ortega grew up moving consistently between Northern and Southern California so her parents could work seasonal jobs planting and harvesting fruits and vegetables for less than minimum wage.

“I witnessed, first-hand, the labor and dedication my parents put into providing just the basic needs of our family,” she said.

Despite her parents’ efforts, Ortega’s family suffered numerous financial setbacks, which forced her father to leave their home to seek other farm labor opportunities.

“Not knowing my father personally or having my father’s presence throughout my life has been a challenge that has affected me on various levels,” she said.

Growing up, Ortega recognized her parents’ sacrifices and also realized that they struggled because they did not have the education to get better or more stable jobs. This experience ignited her determination to obtain an education.

“Being the youngest of 10 siblings and the daughter of immigrant parents has not been easy, but it has taught me the value of sacrifice, dedication and education,” she said. “Therefore, becoming an educated and well-rounded Latina has always been of the utmost importance to me.”

Ortega also had to resist her own culture’s views on the roles of a woman in a Hispanic household.

“As early as high school, I have been challenged with my culture’s discourse and what it means to be a woman in a traditional Hispanic family,” said Ortega, who, at age 15, had to care for her nephews while juggling her roles as a student, athlete and employee. “It was so demanding that I questioned my ability to pursue higher education; however, not wanting my culture to limit my aspirations, I persevered.”

Ortega made it into college and worked three jobs while completing her bachelor’s degree in psychology at CSUSB with two minors in finance and Spanish. She was able to maintain a 3.88 GPA, make it on the Dean’s List every quarter, and earn the Presidential Letter of Recognition. During this time, she was also involved with internships and study abroad programs to Mexico and Spain.

Ortega is now a graduate student who maintains a 3.96 GPA while serving her campus and community as the president for the Counseling Graduate Student Association, a mentor for the Hope Maker Mentor program, and an advisor for the TRiO Educational Talent Search program, among other on- and off-campus activities. She has even interned at Rialto Unified School District as a counselor trainee to educate and expose low-income and first-generation students to higher education opportunities.

Because of her involvement on campus and in the community, she was awarded the CSUSB President’s Volunteer Service Award and Most Community Service Hours Award.

“I continue to encounter the same challenges, pursuing higher education and fulfilling my role as caregiver in my family,” Ortega said. “Despite all my roles and responsibilities being demanding, I continue to excel in the face of demanding coursework while holding a full-time job to support my family and achieve my educational goals.”

Ortega, who was also awarded the CSU Sally Casanova Scholarship and Hispanic Association of Colleges and Universities (HACU) scholarship, aspires to pursue a doctoral degree in educational psychology to become a professor at a Hispanic Serving Institution with hopes to inspire students from disadvantaged backgrounds to achieve their academic goals.

“My collective experiences have shaped my commitment to help foster practices in higher education that will increase access and completion for Latinx college students,” she said. “I want to become the Latina professor that I did not see in classrooms throughout my college trajectory. My goal as a professor will be to instill knowledge, hope and confidence in marginalized communities and develop future scholars and leaders.”

Most CSU Trustees’ Award recipients will receive $6,000, provided that they continue as a full-time student in good standing throughout the academic year.

A virtual awards ceremony and reception is scheduled for Tuesday, Sept. 22, from 4-6 p.m. Awardees will be recognized at the event and provided with an opportunity to meet their campus presidents, Trustees and scholarship donors.

Emmett Pompa, a CSUSB chemistry major, also applied for the CSU Trustees’ Award. Although he wasn’t selected, his application still resonated with the selection committee, and according to a letter from the CSU Foundation, he “demonstrated determination” in receiving his degree. As a result, Pompa has been awarded a $2,000 scholarship.