Seccombe Lake Park will have a new playground come November. With the help of nonprofit organization KaBoom! and Target, the City of San Bernardino will be installing new slides, swings, and other equipment for the area’s children to enjoy.

“This park needs to be revitalized at some point,” said city spokesperson Monica Lagos. “If an investment is put into it, it will get the city back on track.”

A little over a dozen fourth, fifth, and sixth graders from neighboring Leland F. Norton Elementary School were included in the planning process during a meeting at their school site on Tuesday. They sketched up plans for the playground using measurements and art supplies.

“We wanted to hear from the experts–the kids,” said KaBoom lead coordinator Jacob Stachler. “We tell them that no idea is too crazy.”

An adult session–meant to brief community partners and the Parks and Recreation Department about the playground build–took the children’s ideas to select the theme and design of the playground. Committees were also formed to delegate responsibilities among those interested in helping build the playground on November 4.

In recent years, Seccombe Lake Park has been the center of controversy and concern among residents and city leaders due to homeless encampments and large debris present.

“Many parents and children are longing for a safe space to go to that isn’t on school grounds,” she explained. “These kids haven’t had the same opportunity to experience a park like we did as children. Unfortunately, many parents have to travel to other cities to enjoy themselves at parks.”

Norton, considered as a project-based learning school, is more than willing to take the challenge of revitalizing its neighboring park. “Our motto is, ‘One student, one family at a time–dedicated to saving our community.”

Target District Team Leader Jen Olson said she’s excited to be a part of an “inspirational” effort to help a community in need.

“When we heard about the build, we were excited,” she said. “I believe this is something that will help boost the morale of residents.”

Corinthia Williams, whose 8-year-old grandson Wayne helped formulate ideas for the build, said the project has given her some much needed enthusiasm.

“Wayne came to me,” Williams chuckled. “There is no limit in their little minds. These young children are using their imagination to build skills and help their community.” 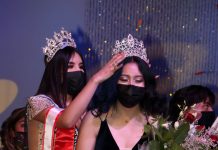